So, in case you haven’t guessed, it’s winter around here.  There’s not a whole lot going on that I haven’t already talked about.  Or maybe I should really put it this way, there’s not a lot going on that I feel that I can talk about yet.  Yes, that means that there are plans and ideas taking shape but none of them are solid enough yet to write them down here.  Though once they are, well, y’all are never going to hear the end of them!  But for this moment, I’m keeping quiet.

What is going on is more spinning and knitting.  Just because it’s cold enough to freeze nose hair outside doesn’t mean that I actually hibernate.  Also, nearly everyone I love in my life is born in the winter, thus making the life of a knitter who loves to make gifts a little more stressful.  I really need to work on working on birthday presents in July more!  The one that I can show you presently is still in its yarn state, which is hand spun so I still get some credit for it.  It’s for the boyfriend for his birthday (which is this week *ahem*) and he’s already seen it so no spoilers here. 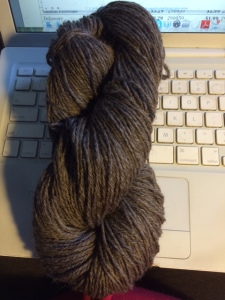 But in the end, he had exceptional taste (if I do say so myself) and chose the tops.

There are other projects that I am working on in the background that I cannot show on here as they would be spoilers.  One of the bad things about knitting for gift giving I guess:-)

The sock yarn blanket has grown some.

It now covers my entire full-sized bed.  Sorry that the pictures are kinda crappy.  Did I mention that it’s winter outside?  It’s currently 15 degrees Fahrenheit (which is 16 degrees below freezing) outside and the snow looks either grey and dismal or yellow and cheerful, neither of which lends itself to photographing a giant knitted blanket on.  I suppose I could try to get creative about how to show it, but that takes time and I personally value my fingers and toes.  So crappy photos it is!

One of the things that I have been doing that I can tell you about (even though I have no photos) is that I am currently taking a class through something called Annie’s Project.  It’s run through the Iowa State Extension Service (love me some Extension!) and it is specifically for women in agricultural endeavors.  The reason for it being specifically for women is that often women have different goals and a different experience with farming than men do.  It has been immensely helpful for me to just figure out where I should be putting my energy.  My class is specifically about business planning, but there are classes about succession planning and in-depth business classes past what we are learning.  It’s reason number 432 of why I love the extension service!