I’m sitting here in the Newark airport writing this.  It is 9 o’clock Monday morning, always a sober slap of reality, more so today more than usual.  I am not used to rush hour traffic going into New York City.  Hell, I’m not used to rush hour traffic at all!  So getting here was more than a little stressful for me, but my trusty GPS got me here with a minimum of fuss.  Of course I forgot to put gas in the rental before I returned it, but that even turned out to not be that bad as it only ended-up being a little more than it would have been if I filled it up myself.

I’m transferring the pictures from yesterday as I am typing so I end-up with these corners of pictures behind the area where I’m typing.  I am itching to look at them all. I have the 2 hand stamps from the festival still on my right hand.  You can’t read then so it sorta looks like I may have been in the city all weekend clubbing (except for the fact that I am a 30 year-old woman wearing all Land’s End and Target.  I’m pretty sure that clubbing hipsters don’t wear Land’s End corduroy jackets!) 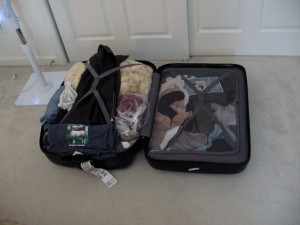 Their boy dog was positively making-out with one of the bags.  There are 2 fleece and a pair of shoes in one of the bags and 2 fleece, a bunch of  bags of rovings and batts , all of my clothes, all of the books (I’m ruing that decision bigtime right about now!) and all of the goodies and stuff that I got.  So, yesterday, I gave you a little teaser about how I suddenly had another fleece in the stable so to speak.  Late on Saturday I found an alpaca fleece that I absolutely fell in love with.  It was a “low graded” one, it got a “C”.  The alpaca fleeces are judged a little differently than the sheep fleeces.  The sheep either get a blue sticker (really good fleece) or a red sticker (a perfectly acceptable fleece but it has some fault somewhere and there would be notes as to the fault) or, I think, no sticker.  All of the fleeces that I bought were blues, though none of them had earned ribbons (that’s a blue that is the top of it’s class).  So the alpacas are graded A, B, C, just like in (my) school.  So, like I said, this was a “C” grade.  So I asked one of the people manning the tent why.  She explained to me about the grading and how that wasn’t a terribly good alpaca fleece because it didn’t have a lot of definition and crimp and, well, all the stuff that you look for in a sheep’s fleece.  She admitted to me that the fleece was one of hers, and I really appreciated her honesty in disclosure.  But I was totally enamored with the color (it is  silver) and the price and when I asked her if it would be appropriate for blending (I was imagining it with the grey sheep’s fleece that I had already gotten that day) she said that it would.  Since it was running late (I had a party to get to after all!) and I had not enough cash on hand to get it, I said that I would get it if it was still there when I got to it on Sunday.

This is the alpaca sale was. (Ummmm...alpaca.) 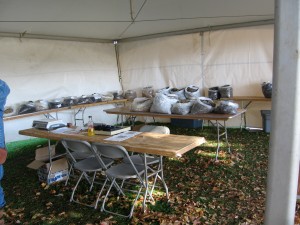 The mohair sale next to it.

It was still there.

I now own Chico’s former covering (Chico is the alpaca, not the lady).

It was still there even though I didn’t get to get to it until well after they had opened because I was busy making a fool of myself in front of the Yarn Harlot.  Yep, I got my book signed by Stephanie Pearl-McPhee herself!  And I have the picture to prove it!

Me with Stephanie Pearl-McPhee!Proof that I don't just sign them myself

I also got a book signed by Doris Chan the author of Everyday Crochet and Amazing Crochet Lace.  She was super nice and a pleasure to talk to.

I also got signed books from Joan Tapper and Gale Zucker the author and photographer of Shear Spirit: Ten Fiber Farms, Twenty Patterns, and Miles of Yarn (which is an absolutely beautiful book and I would highly suggest it as a Christmas or birthday gift to any fiber enthusiast in your life) as well as Luxury Yarn One-Skein Wonders by Judith Durant.  I spent a very fast $100 in the book both in the morning;-)  But it was very cool to meet these people face to face and well worth it.  I like to support independent bookstores wherever I can and this was obviously a family run operation (the kids were manning the cash registers!) and the owners were so very accomidating and very, very nice.

Just an aside, I almost forgot to mention that I also got a copy of “It Itches” signed by the author and artist himself, Franklin Habit (check out his blog if you haven’t, some very funny stuff….) yesterday.  It was total happenstance (even though I knew he was going to be there [hey, it was pretty overwhelming, give me a break already!]).  Anyway, the book is super cute and would make a really great gift for any fiber enthusiast in your life (Christmas is coming…..)

Then I went through all of the barns and buildings again at a much more leisurely pace.  There were not nearly as many people there so the booths were much easier to look around in and talk to the owners of.  I took a lot of pictures of the various booths just so everyone could get an idea of what it was like.  However, there is no way that I could take pictures of all of them as there were just way too many. 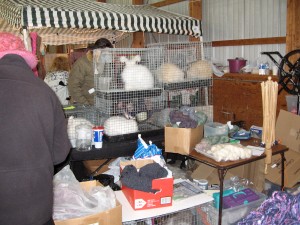 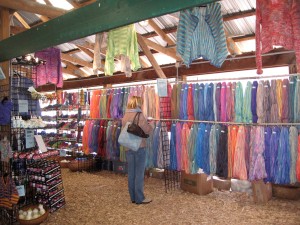 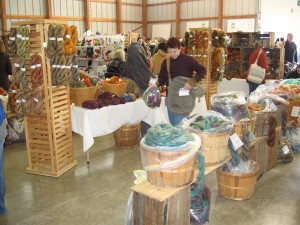 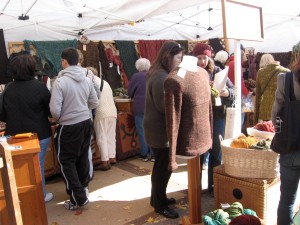 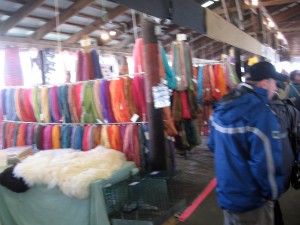 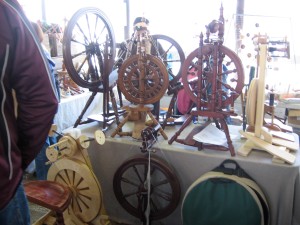 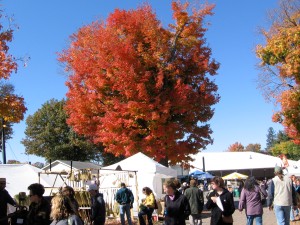 I also got to watch part of an Alpaca show.  Alpaca and lamas seem to be pretty natural comedians.  It was fun to watch, but it was cold sitting still, so I kept moving. 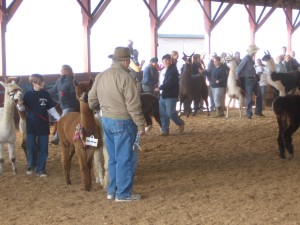 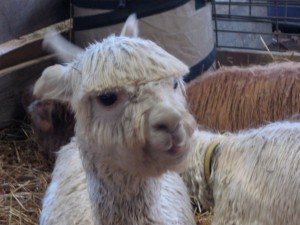 I stumbled upon some sheep (go figure, right?!). 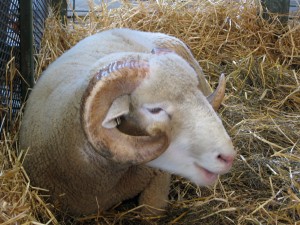 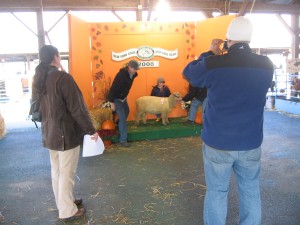 And even some goats.

Some were more friendly than others….. 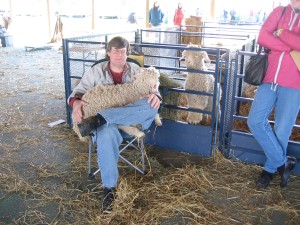 Animals and wool weren’t the only things on display at the show.  There was also a photography contest.

There was also a fleece to shawl contest which is missed most of.  It is a team event where they take a washed fleece and spin it and then weave it into a shawl.  It is very amusing to watch.

There were also examples of peoples spinning as well as finished projects like sweaters and blankets being judged. 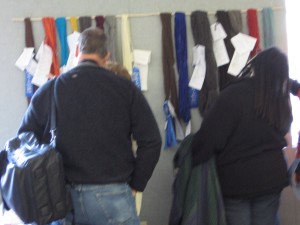 I also got to see an angora rabbit get sheared.  It was pretty crazy, it was so calm while it was going on, just sitting there on the ladies lap.

Then I just wandered around for a while.  But I knew that I now had four fleeces to get into my suitcases at home as well as a bunch of books and other stuff and a 2-hour car ride in order to do it.  So I reluctantly packed-up my car and said good-bye to the gate guy who, at this point, didn’t require me to take my glove off to show my stamp when I would come back in (this is something akin to the salespeople at your favorite store knowing your name) and got into my rental and headed back South.  It was around 2:30.

My instincts in leaving early were good as traffic heading back towards the city was pretty bad in some parts.  I made it back to Flanders in time for dinner.  The dogs had been trying to get into my room all day and the father–in-law (who I had not seen the night before as he was already asleep when I got there) was a little baffled as to why!  When he saw the dogs reactions to the fleece, it all became abundantly clear!  They really wanted to do something to the alpaca fleece.  I took out a few locks to show him what I had and the dogs actually nipped him trying to get to them!

All in all, it was a really full and fun day.  I still have more pictures, so just be patient!

One thought on “Rhinebeck: Day Two”