Yesterday I had a chance to go with the hubby to Bath.  He was going there with a co-worker for work while I was going there to get out of the damn house.  It gets pretty…..well…… intense if I’m not able to get out the house every once in a while.  To put it simply, I go a little batty.

Anyway, we left the house at about 7am to catch the train from Tring into the city.  Once we were in London, we had to go from Euston Station to Paddington Station where we met the happy co-worker and caught the train to Bath.  The ride on the train takes about an hour and a half, but it was pleasant with great views and lovely conversation.  When we got to the ancient city, I wandered off to have a look around and the guys caught a cab to go off to their appointment.  I meandered up their main shopping street where I found their quite nice Oxfam book shop (you can take the girl out of the country and make her carry a lot of books up a flight of stairs but you can’t take the girl out of the used book shop!) and got a couple of books.  I then found my favorite WH Smith in the country where I finally found a copy of the much anticipated Inside Crochet magazine.   I’ll have a review of it in tomorrow’s post.

After hitting the essentials, I decided to mosey on up to the Bath Fashion Museum.  This is one of the few things that I hadn’t done yet in Bath so I figured that this would be a good time to check it out.  As with all admittance fees in Bath, I found the 7 pounds a bit hefty to go to a museum, but I pressed on thinking that it may well be worth it.  Sadly, it wasn’t.  The museum is pretty small and in a basement under the assembly rooms.  The lighting and the paint colors chosen all made it feel rather like the War Rooms in London than a place showcasing fashions of the past.  There was one exhibit there that was sort of interesting.  It was a retrospective collection on the work of Bill Gibbs.  The exhibit was interesting though sort of messy.  The walls facing the clothes were covered in a nearly indecipherable mass of pictures and bits of writing from a fashion writer who seemed to write more about himself than about the actual subject which made it quite incomprehensible.  The handouts which you needed if you were to make any kind of sense of the exhibit were badly photocopied and really dog-eared.  Is the museum in such a precarious financial situation to not to be able to afford a laminating machine and a color printer?  Only a handful of copies of this are really needed since the room was too claustrophobic to hold more than 10 adults at a time (and surely not all of them would care enough to pick-up a copy!).  The clothes were pretty impressive, what could be seen of them through the very dim lighting.  Once again Kaffe Fassett and I meet in Bath as he worked with Bill Gibbs in the 70’s and there were several of his pieces on display in the exhibit.  Here’s a couple that I managed to take photographs of through the glass display cases….

The Color work is unmistakable

The fashion museum may have been a disappointment but the sunny day and lovely Georgian architecture of Bath were seriously pleasing.  Just wandering around this city shows just how much planning and forethought went into it as it is nearly impossible to get lost.  And if you do get lost, you really don’t give a shit since the views around each corner are so lovely.

Bath isn’t typical of British towns as it actually had a design.  Unlike London or the myriad of smaller towns and villages that simply grew without a lot of organization, Bath had a central planner and was built, for the most part, all at the same time.

A church and the Abbey in the background

The center of Bath is more or less the ancient Abbey and the Roman Baths.  I’ve been to the baths a few times and decided not to go in this time around.  However, the Hubby did get a shot of me “crocheting the Abbey” for you.

After we were done sightseeing in Bath we caught a train back into London.  Since it was already the end of the day, the Hubby wasn’t going back to work.  I decided that since I was already in the city, I wanted to investigate reports that I had heard that yarn was sold in some department stores.  So, we took a tube to Oxford Circus and there we visited John Lewis.

I want to move in to this store.

For starters, it had the nicest yarn selection that I have yet seen in this country.  It was also the most reasonably priced selection that I have yet to find here.  In fact, I actually found a yarn that is cheaper to buy here than it is in the US.  I found Mirasol Sulka for 4.85 pounds.  The usual going rate for it in the US is from $8 to $10, usually on the higher side.  Even with the exchange rate, it is a lot cheaper in a department store in the UK.  They had, what looked like, the entire Debbie Bliss line as well as the Rowan line.  The folks working in their craft department were helpful and the whole place was well organized and lit.  The entire store reminded both of us strongly of the Marshal Fields flagship store in Chicago.  It not only had clothes and make-up, but furniture and upholstery fabrics and things of that nature.  We also visited Liberty’s department store in the amazing faux Tudor building where they stock the Rowan line of yarns as well as a very nice fabrics department as well as a lot of knitting and crochet tools.

We then went to dinner at a Japanese restaurant that the Hubby knew of nearby.  It was here that I met the bottle that killed my resolve not to buy anymore yarn until Maryland Sheep and Wool.  We got a bottle of plum wind to go with dinner and for some reason, I ended-up drinking, well, more than half of it.  After our excellent meal, a very giggly Sarah with Hubby in tow marched (or, to be slightly more precise, careened) back to John Lewis for a little after dinner yarn shopping therapy.  I got 7 more skeins of the Mirasol Sulka, 3 in cream and 4 in navy blue to match some of the light green that was already residing in my stash at home.  I also got 5 balls of Freedom Spirit by Twilleys of Stamford that was quite reasonably priced.

Yeah, I totally fell off the wagon on that one.  I blame it on the drinks.  3/4 a bottle of wine and decent priced yarn within walking distance is a dangerous combination!

On the way there we managed to get a photo of me crocheting the iconic red telephone booth. 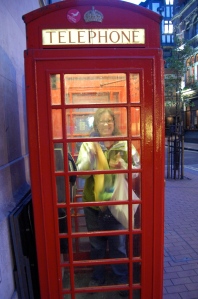 Can you see me giggling?

My lapse heralded the end of the night with the siren’s call of puppies needing to go to the bathroom as well as a serious need for some sleep.