I have been making flowers today in a couple of different forms. I spent most of the morning and a lot of the afternoon sitting in the shadow of the conservatory on an upturned former cat litter bucket wearing a t-shirt and jeans and my birks. I filled pot after green plastic pot with potting compost that we had purchased last weekend while in Milton Keynes then lugged them over to my makeshift potting seat and proceeded to pot-up about half of the violet cuttings that I brought from home.

I had checked the cuttings a few nights ago to see how they were, as I say, cooking along, and found to my happiness that it appeared that most of them had roots on them. This of course caused me to stop the worthwhile project that I was working on and immeadiatly sort thorough all 300 or so of them and put them into “done” piles and “still cooking” piles. My done pile was quite large so I decided that it was time to start the potting insanity. However, I couldn’t start it yesterday as we were having houseguests out from the city and my dear sweet husband, saintly as he is with my rather interesting whims, was not in the mood to have a mud covered wife tracking soil and wet all over the house.

So, I sat on my hands (or more realistlcally, I crocheted with my hands [oh, and helped to clean and cook and drive and all of that too]) and waited until today to start potting my violets. I’m glad that I did as it is easier to get into a rythym when I am alone in the house. I have my own quirky ways that I like to do certian things and though the hubby would easily oblige me if I asked him to do something different in how he is helping me, I hate to ask it of him, especially when it is just a matter of weirdness on my part. I didn’t get to finish potting up my violets as I ran out, not of compost/soil but rather trays to put the potted-up plants on. I will need to go to the Homebase in Leighton Buzzard to get some of the nice black, plastic trays with no holes in them. (Homebase is much like a HomeDepot in the US for those who hadn’t already guessed it.)

For some reason, these are nearly impossible to find anymore in the US but they are everywhere here. I think that at least part of that is because of the gardening culture here. The hubby and I were sort of talking about this the other day as we drove home via the seneic route and we went by a bunch of really pretty gardens of some terraced homes. He mentioned that the Brits, “give good garden,” and I had to agree. When discussing this with someone else they asked if it weren’t the same in the US and I had to, much to my chagrin, say that no, we don’t give good garden in the US. I think that we give good lawn there. Anyway, my plans to pot-up the whole lot of them are stymied by the fact that I cannot put them anywhere currently.

Weezy soaking up the rays..

So, I decided to go up and work on the comissioned blanket. I am nearly out of the gold needed for the center of the flowers despite the pattern saying that there should be more than enough in the ball of yarn I picked-up to make all of the centers. I don’t know who is crazier, me or the pattern (or posibly the ball of yarn, but they are usually pretty sane….) but I am looking at a seriously collapsed yarn ball and a LOT of little yellow flower center yet to make. I have already sent out a yarny S.O.S. (thank you again, Lily!) so now I am just working on some of the petals for the centers that I have already made. 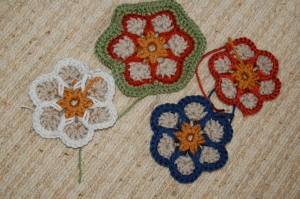 I feel like I should really be using more specific terms for my crocheted flowers. I mean, I am going to be graduating from college (not collage) with a degree in horticulture for God’s sake! But there really isn’t any stamens or pistals in these representations of flowers, only yellow center bits. So should I just call these the “sexy bits” of the flowers? Isn’t it odd that we humans put the sex organs of plants on everything? I don’t see anyone else putting the sex organs of us on a t-shirt or anything. Then again, who would do that? Aliens? Maybe they do, for all we know, put diagrams of uteruses and testicles on their clothes…..