So, I haven’t shown y’all a lot of what I’ve been doing of late and I think that it’s about time that I rectified that.

First off, I finished the cabled embrace scarf.  It turned out nicely but I was just sooooo glad for it to be done already!  It wasn’t difficult once you got the knack of the cables.  I finished it one of the nights that Jiji was so sick and I was staying up with her.

I’m working on another scrapghan while sitting watching Buffy and Angel on DVD.  Yes, it’s another biggin!

Hanging from the 2nd story walkway

The grey sock gets worked on sporadically.  It just feels like a good travel project of late (since everything else has gotten so big by comparison) and I haven’t been doing a whole lot of traveling. 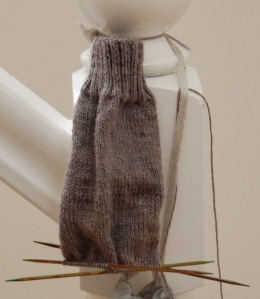 The Feza scarf is still getting worked on but I feel as though it is at the point that the Cabled Embrace scarf was for some time.  Basically, it seems as though the yarn ball isn’t getting any smaller no matter how much I work on it.  It’s a pity that the black hole of yarn that this “extra” yarn is coming from isn’t in existence all the time!  One ball of yarn for any project.  then of course, yarn store owners would just charge a lot more for that one ball I suppose….

I quickly crocheted a strap in recycled sari silk to replace the the strap that came with our Nikon camera.  Neither of us were comfortable with the length of it nor really the material.  It’s turned out fine until I went to wash and block it a little bit.  The water turned a bad shade of purple and smelled bad.  So I washed it more properly with Soak and it still smelled bad and there was even more purple in the water.  Now this yarn sort of smelled vaguely like straw when I got it.  That’s ok.  I like the smell of straw.  The smell after it got wet was nasty chemical yuck.  Between the idea of having a purple neck after sweating while having the camera on me and the thought that whatever made that nasty smell isn’t coming out of the yarn I am having to put this project on the backburner.  I’m thinking about trying it again only in some Noro Silk Garden, I’ll let you know how this turns out..

Last but not least is the Cesar and Pam blanket.  This one is still in sewing-up stage as I can only sew for about a half hour or so before I get a splitting headache.  Time for bi-focals maybe? Anyway, it’s because of this that this blanket is moving so damn slowly.  I’m not sure why I don’t get these headaches when I’m doing the other stuff but I suspect that it is because I don’t have to stare at them quite so much as I do when I am sewing.  As lovely as this blanket is going to be I am going to be SO GLAD when it is done (which needs to be before I go back to Florida).

I used an old photo here as Meara is SO DAMN CUTE!

I have still been spinning the Romney/Rambouillet fleece.  I am getting finer and finer to the point that some of the two-ply is pretty close to laceweight!

That’s about it for now.

(BTW  Listen to episode #84 of Cast On with Brenda Dayne as both the hubby and I are both mentioned on it.  How cool is that?!?!)

One thought on “WIP’s and FO’s”