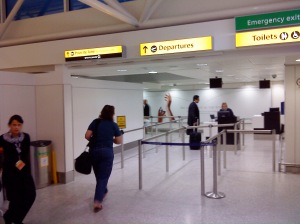 Moving into security in Heathrow

My bags in the back of the shaggin wagon

I’m sitting here cooling my jets in the Dusseldorf airport feeling very glad that I didn’t have enough cash to get the Glenmorangie Scotch that I wanted to get.  Despite assurances that from the airline representative that I had called specifically to make sure of this, I was made to go through both passport control as well as security here once again.  The security here is much tighter than in the US and took quite a lot longer, helped along by the fact that I had forgotten to ditch the last two of the buy 3 Dr Peppers for a really good price that I had picked-up in a Heathrow airport WH Smith.   Luckily, the flower bomb perfume that I got fit nicely into my plastic baggie after I had divested it of it wrappings.  My flight from London had been late but my flight to Chicago is even later!

The sturdy beast that ferried me to Chicago

The next day in Chicago:

I’m in Chicago now with the dulcet tones of Sesame Street playing in the background.  I arrived safely and with a minimum of fuss even given a middle seat on an extremely crowded flight.  I think that I have finally found the key to international flying: Scotch on the rocks.  A few of these made the entire process that much more enjoyable!  Anyway, I have had a Mountain Dew and a good sleep (not normally two things that are conducive to each other but without the MD I would not have been able to make it to 9pm last night) but yesterday they were just what was needed.  Tonight is a party of my friends that are here in the Chicago area and SJ and I are sitting here trying to figure out what we are going to do today.  I suppose that we had best get on with it then….

One thought on “Gone.”