So, I haven’t really blogged in a while and I have lots and lots to share with you.  So, here is your disclaimer: If you are at work or otherwise at a point and time that you cannot download fifty bajillion and a half photos…. wait to read this post, ok?

All right, got the “official” stuff out-of-the-way, now on to the fun stuff!

So, I left you hanging in Chicago didn’t I?  So I guess that would make a logical place to start!  The snow was quite deep by the end of the storm.  I have heard both 12″ and 14″ bandied about as the amount that fell so I will leave it at a heck of a lot of snow! 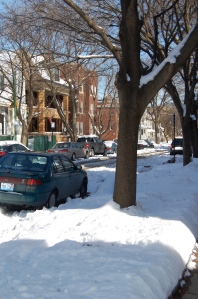 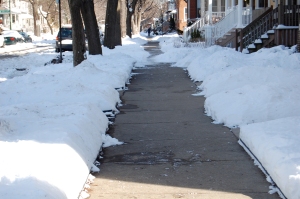 I received a couple more packages while I was in Chicago, one was a package from my lovely in-laws and the other from Blue Moon Fiber Arts.  I just realized that I forgot to take a photo of the Silk Thread II that I ordered for my Evenstar shawl before I balled it up (sigh) but I did take photos of most of the lovely presents from the in-laws!

The Sexy Red Namaste bag "Hermosa" that the in-laws gave me for my birthday!

I used that bag as a carry-on on the flight home.  It was a case of “perfect present, prefect timing” on that one! 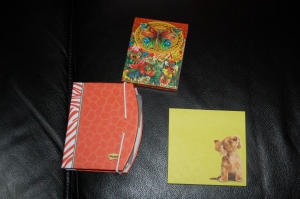 The in-laws also realized just how many post-it’s a knitter goes through and sent me a bunch!  They also got me a subscription to Vogue Knitting as well as a card game to play with the hubby.  A throughly lovely birthday package I must say!

Now, since I didn’t take any photos of the Silk Thread II before I balled it I give you, urm, balls!  Now, you will note that these are in fact balls, not the cake-like “balls” that a yarn winder makes.  The reason for this is hand-hurtingly simple.  Pure silk is too slippery to stay in a nice cake, so one must wind it the old-fashioned way.  By hand, into a ball. 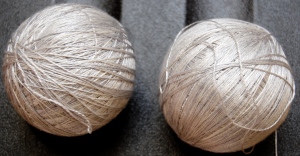 I also got a skein of Socks that Rock from the Raven clan in Grawk (I liked the skein that I got for Tini at Rhinebeck that I had to get another for myself!)

LOVE the colors of this! They are soooo subtle yet really quite clear to see!

I did a couple of other things while I was in Chicago while waiting for my packages.  I went to a pub and watched the Opening Ceremonies of the Winter Olympics with a group of friends and friends of friends.  I went to another bead store called Bead in Hand and (hopefully) got enough beads for the Evenstar.  I visited Loopy Yarns and I would highly suggest to anyone visiting Chicago to go there!  It is easy to get to from the “L” and it had a FANTASTIC selection of yarns!  It was like a treasure trove of all the best brands and colors!  Plus, they have a fun electric ball winder (I could watch that thing all day!).

My trip home was uneventful except for the worst case of jet-lag that I have even encountered.  I was still off time zone a full three days later!  Being up at 4 am completely awake and ready to rock is an odd and disruptive thing to deal with!

On the 21st of February we met up with some friends of ours in London to go see the Chinese New Year celebrations in Trafalgar Square and throughout London’s Chinatown.  It was incredibly crowded, so crowded that it was difficult to see the big screens that were showing what was going-on on the main stage, let alone the stage itself.  However, had one rather interesting experience there… I got handed a red balloon by a police officer in uniform!  The London Police were one of the main sponsors of the event and thus, there were cops handing out balloons! 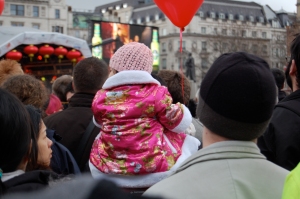 I just loved this little girl with her bright coat and red balloon on her dad's back watching the show. 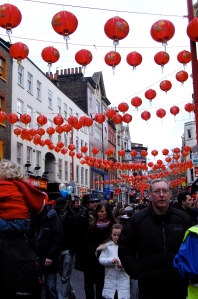 The streets of Chinatown were decked-out for the party! 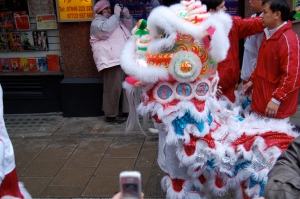 A "dragon" going from shop to shop begging for...cabbage?

After getting some yummy Chinese food at a great restaurant just outside of Chinatown, we wandered over to get some gourmet ice cream at Fortnum and Mason which is a very, very, very nice department store that sort of specializes in food and food related products.  They have an ice cream parlor in it where we all got huge sundaes. 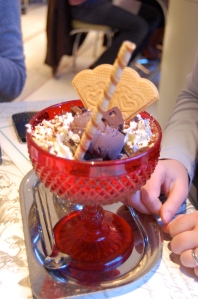 Afterwards we went to the Green and Red for a few drinks before the hubby and I headed home to some lonely pets.

This past weekend we drove up to Coventry to enjoy a mini ravelry day at the opening of Yarn Gathering, Jo Watson’s new yarn shop.  Jo is organizing the Knit Camp this summer that I am so very excited about and last Saturday was a way to meet some of the folks that are helping her put it together as well as a few of the tutors!  It was a very fun time and I would highly suggest that if anyone is in the Coventry area that you check out her store.  It has a really solid selection of yarns (and more coming in from what I’ve gathered) as well as one of the best book selections that I have seen in this country! 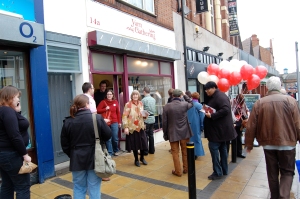 Everybody outside for the "opening"! 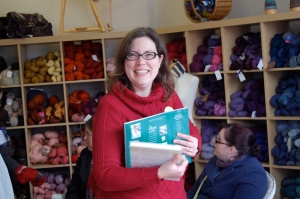 I go into a yarn shop and come out with... books. 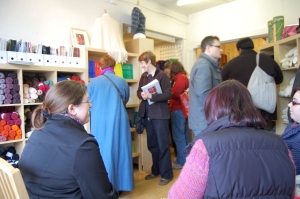 There were lots of people there.

Jon from Easy Knits was there with his crew. 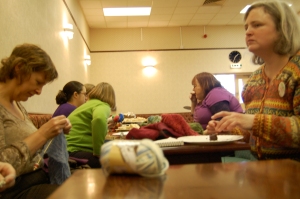 There were sandwiches and yummy cake to munch on next door in the social club.

I got a few things… 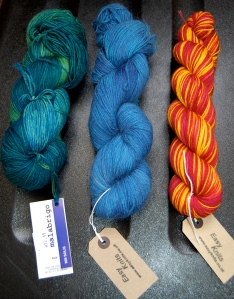 The 2 yarns on the right are from the Easy Knits booth up in the social club.  The Blue one is an alpaca/silk mix sock yarn while the red and yellow one is a BFL superwash sock yarn.  The blue/green yarn on the left is Malibrigo sock yarn which is a 100% superwash merino in the colorway Solis.  I also got some books: 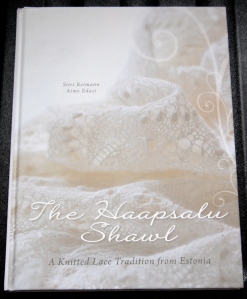 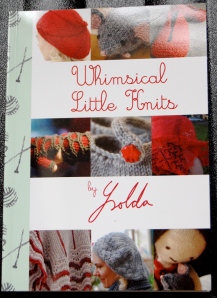 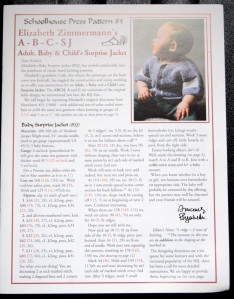 and some dpns for making hats.  No pictures of those as they are, well, dpns for hats.  Use your imagination if you must!

Yesterday I made the swatch of the Evenstar shawl.  I’m tired of waiting for my yarn to come so that I can finish my Clapotis.  Here is the swatch:

I’m both looking forward to and dreading starting the shawl as, well, that swatch took nearly 3 hours for me to knit.  Now, mind you, a goodly amount of that was looking-up stitches that I had no idea how to do on YouTube, but still, it wasn’t the easiest piece of knitting that I have ever done in my life.  Still, I want to do it and finish it in time to wear to Knitcamp (a shawl makes sooooo much sense in Scotland in the summer!).

Coming up I have some book reviews and cute photos of pets.  I know you can’t wait!

2 thoughts on “Catching up”