Yeah, that about sums up my urge to blog the past few weeks.  And I’ve stuff to blog about to be sure.  I went to Fibre Flurry in Birmingham and had a great time despite the M1’s attempt at making me miss it entirely.  I went to Loop in London, finally.  I had dinner with one of my roommates from KC and her family.  I had a tour of a prospective campus for my graduate degree.  I’ve done a lot of spinning.  The annual moving of the tender plants into the conservatory took place.  I mean, TONS of stuff has been going on, but I’ve not blogged a bit about it.  Just couldn’t be arsed.

So, a super speedy tour is deserved if you’ve hung on this long awaiting a new post.

Fibre Flurry was fun.  The M1 was not.  We (tech support came with me) were stuck on the M1 for hours going under 30mph for most of it.  However, we did finally make it, and it was great!  The building it was held in was super cool, with the exposed logs of a very old building and super modern glass and steel for other parts.  Being late to the game had its advantages as we avoided the scrum match that apparently occurred in the morning.  Since I wasn’t taking any classes, being late wasn’t the end of the world as there were only (God I sound so jaded don’t I?) 26 vendors, so it was easily doable in an hour or two.  Of course I got to chat with Jon from EasyKnits and his lovely hubby Roy for a bit as well as Ann Kingstone and the fantastic gang at The Bothered Owl.  I’ve seen most of the vendors before, though there was one that was new to me, Posh Yarn which had some absolutely lovely stuff.  I bought one skein of “Martha” sock yarn in the colorway “Running Wild” which has been my petting yarn for the past few weeks.

Loop in London is an absolutely lovely store in a very fun little shopping neighborhood.  I didn’t take any pictures (bad me!) but I did get a book and some Malabrigo lace yarn.  I could easily make an entire day of the neighborhood, which has lots and lots of vintage and antique shops on tiny back streets.  That night I met with Kirsten and her wonderful family for dinner.  It was a really lovely day to say the least!

I went to the Silwood Park campus of Imperial College London for a tour and to learn more about the masters program that they have there in both entomology and integrated pest management.  I plan on applying for one of these programs which would start next year in October.  It’s a year-long program, including research.  It would be a crappy drive to get to Ascot each day of the week, but the days seem full and well planned and I wouldn’t be driving an hour each way only to spend an hour or two in classes or something.

Tomorrow the hubby and I are leaving for Estonia and Finland.  Well, to be precise, we are going to Tallinn, staying overnight, then taking the ferry to Helsinki where the hubby may stay in the city or may come with me up to Tampere where I am meeting with Malin and Barbro and going to a big craft fair.  Then Malin and I are coming back down to Helsinki where we will get to meet her furry niece (dog) and her hopefully not so furry brother for dinner:-)  The hubby and I are then spending the night in Helsinki, then taking the ferry back over to Tallinn for the rest of the week.  I hoping that we will have some time to go up to Haapsalu, home of the lace knitters made famous in the US by Nancy Bush.

Since I have no pictures of any of the exciting things I’ve been doing, I will go to my default.  A gratuitous Meara shot: 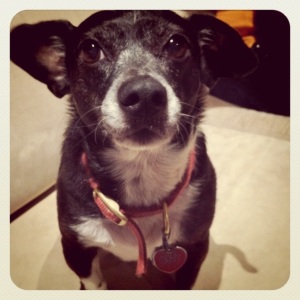 God, she gets me every time!

(Just an FYI, the dogs and Jiji the cat are going to our local kennel while we are gone.  They love going there.  The first time we left Meara there, she came back with a pulled muscle in her, well, her bum from playing so much.  It’s a vacation for them too I think!)

One thought on “I Just Couldn’t be Arsed”