Ok, so maybe not, but I sure feel like it after the epic battle that I had blocking my finished Finnish shawl.  Say that five times fast, I dare you.  Actually, it really wasn’t that tough.  I know, you are just about ready to gouge my eyes out right about now aren’t you?  After checking-out the options that there are for blocking shawls I decided on one that I heard about while on the Shetland trip.  I’m not sure who or where exactly I heard it, I just remember hearing it there.

What I did wasn’t the standard 50-bajillion-pins-in-the-guest-bed version of blocking.  Since this design has very straight edges and the many-pins blocking usually leaves you with a bit of a scallop no matter how many pins you stick in the mattress I decided to thread a piece of fishing line down the 3 edges with a needle and then use those to pin.

I have to admit, this sounds like much more of a pain-in-the-ass than it really was.  I did it before I washed it, since the fishing line isn’t going to absorb any water or dye, and it took me maybe half an hour, forty minutes tops, to sneak the fishing wire through the purl bump of every other row of garter stitch on the edges and though the cast-off stitches of the top.

So, here is another photo of the shawl unblocked just laid out on the bed it is going to be blocked on. 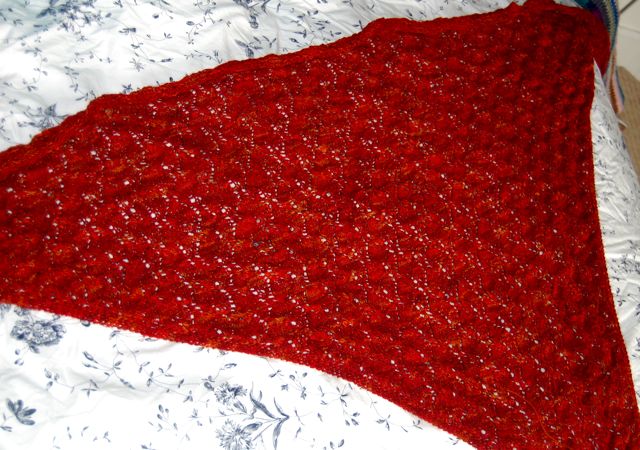 This is what the threading of the fishing line looked like.

Then the shawl went for a little soak in Soak! 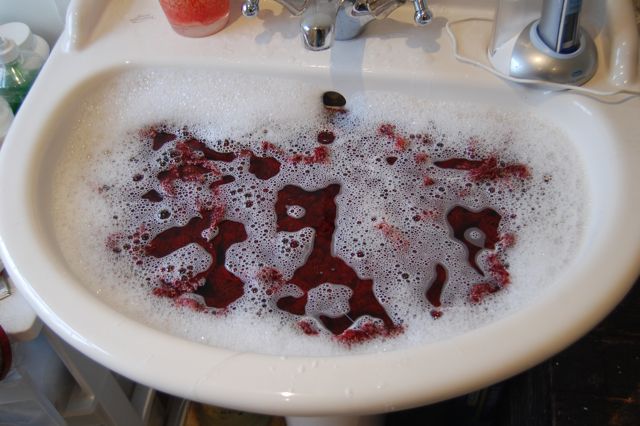 Unfortunately, the Wollmeise dye came out quite a bit, so much so it looked like my shawl was sitting in a sink full of cat pee.  (I don’t know why I gravitate to cat pee rather than human, dog or other pees.  Perhaps it is because I’ve had to deal with so much of it due to the lovely Jjij!)  You can see the fishing line sticking out of the water in this photo.

I rinsed it five or six times before I finally gave up and pour a couple of glugs of white vinegar in the mix.  That seemed to do the trick. 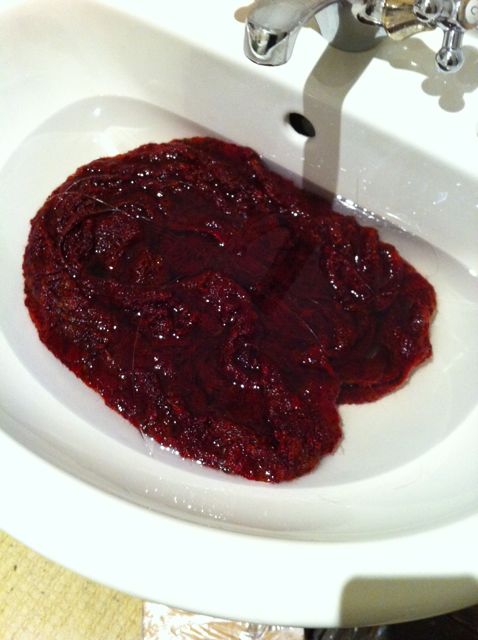 I gave it another final rinse just to get rid of some of the vinegar smell and then rolled it up in a towel to get rid of some of the water.  I didn’t take a picture of this, you’ll just have to imagine a piece of wet knitting rolled up in towel.  After I had gotten rid of most of the water, I started pinning it out.  I first did the top line and then the two side lines by making knots in the ends of the fishing line and pinning them to the bed.  Then, because of the pull down from the two side lines, I added a few extra pins to the top line. 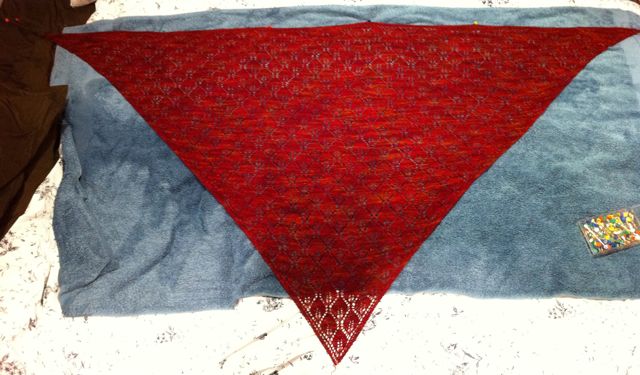 To give you some perspective on the size of this thing, it is on a full bed lengthwise.  And both tips of the shawl are just at the edge of the bed.  I’m rather glad that I didn’t decide on that “one more repeat” of the pattern!

Some things that I learned with this pattern:

>The pattern doesn’t need to be in English, you just need to know what language it is to get it translated.

>It is also good to have friends that happen to speak the language it is in.

>Wollmeise bleeds dye. Apparently this is common knowledge.  I guess I’m uncommon:-)  (Though it does make sense given how RICH the colors are!)

>I would probably try for a heavier fishing line next time.

>Lace done on a non-cobweb weight of yarn goes a lot faster. (I know, big duh there, but damn! It’s a LOT faster!!)

>A skein of Wollmeise lace garn goes a LONG way.  I still have a little under half of the 300 gram skein left.

>For whatever reason, my iPhone takes much better pictures of reds than my Nikon does.  This is good to know since red is my favorite color.

>The iPhone also takes better photos of pee water in a sink.  I hope to never need that knowledge again (though suspect I will).

>I learned how to drop stitches down to fix a mistake made in the previous row rather than tinking back.  To say that I was pretty pleased with myself when I got that one would be an understatement.  I mean, I knew theoretically that it was possible, but I was never ballsy enough to do it until I was looking at a LOT of tinks to get back to the mistake.  Amazing how being lazy can make you a better knitter!

>I need to find an old stone wall.  Near here.

So, no glamor shots of the shawl on an old stone wall (not a lot of those around here) or on me (is hard to photograph yourself, even harder to photograph your backside.) The neighbor whom I would normally enlist on this sort of insanity wasn’t home most of the day and, to be honest, the light is pretty crap today anyway.  So, it may just have to wait until the weekend. And then the hubby can follow me around with the iPhone.  Taking pictures of my backside.  I don’t think that he will complain too much.

Needles: 2.75mm Knit Picks circulars in a variety if lengths.