So, the application is done and dusted and sent off to Imperial College to pore-over and now I get to work on a few things.  I didn’t really feel right blogging too much when I had this application looming over my head, like a great e-sword of Damocles.  However, it is done and there is nothing more to be done about it now except to wait.

Kali helping finish up the application

First off is Christmas.  So yeah, I’m blogging about Christmas on the 13th of January, big whoop.  It happened in my life and I am going to write about it.  I got lots of lovely presents including many, many books (which always makes me happy) and lots of white cake mix (can’t get it here, thus it is a luxury) and a Phat Fiber box.  Probably the most popular Christmas gift this year though was the little Halogen space heater that the neighbor gave me.  An electric fire (what I’ve been calling it) like that is a good way to bring the entire family together!

And this doesn't count the Martha Stewart mammoth that came later! (Yes, there will be book reviews!)

I had lots of fun opening the Phat Fiber box on Christmas!

Lots of mini skeins of sock yarn (perfect!) from the Phat fiber box 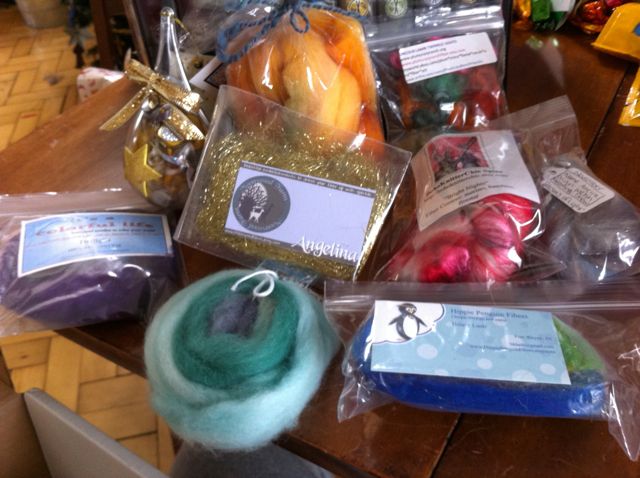 Little samples of fiber to play with from the Phat box!

We went over to the neighbors for Christmas dinner, which involved a great deal of alcohol.  This is something that the hubby and I picked-up on last year when listening to radio programs and everybody was making jokes about being pissed on Christmas (pissed as in the British meaning of drunk not the American meaning of angry [or, you know, actual peeing]).  I think that this may go a long way to explaining why Santa rides through the village in a sleigh, mounted on a wagon, pulled by a lawn tractor ending-up in the pub.  Yes, you read that right, the Ivinghoe Aston Santa goes to the pub on Christmas, I mean, where else would Santa go after delivering all those presents?!?!?  Anyway, we had a wonderful time with our neighbors and their family.  The highlight of the night was when I got a trivial pursuit question about what cheese is from the  village of Hawes and I let out a whoop (I had had a few at that point) as I actually knew the answer to it!  (It’s Wensleydale Cheese before you all hit the Google).  Before y’all totally roll your eyes, I had spent most of the night listening to them rattle off obscure (at least to me) British historical facts, so the fact that I, an American knew the answer and that they, a room full of well educated Brits didn’t, was quite exciting to me.

(I’ve just re-read the last paragraph and have decided that I need to get a life immediately.)

New Years was quiet, like the hubby and I tend towards.  Neither of us are party animals, so going out on a night when there are tons of drunks wandering about just doesn’t appeal.  We usually stay home and have a fondue party for two.  This year we just did cheese, no chocolate, but it was still good.  Drank a little fizzy drink and then went to bed.  I know, you just can’t keep up with us party animals!!! 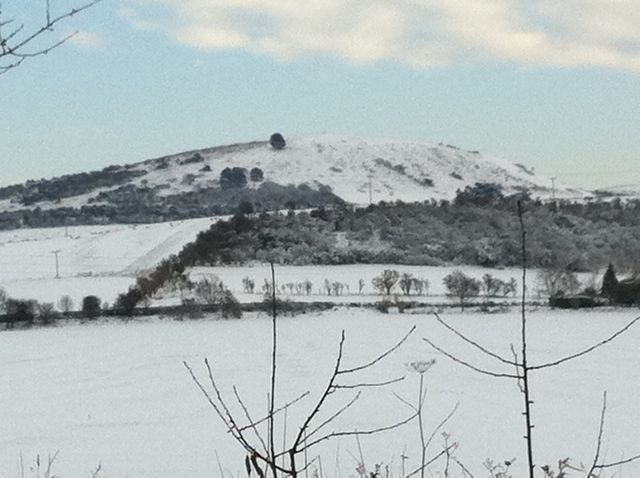 The Beacon, sometime around Christmas

Truth be told, the whole holiday season was mostly about chilling-out on the couch watching X-Files (I got the entire series on DVD from the hubby. 2nd most loved present this year!) and knitting.  Oh, the sock yarn blanket has done well!  I am making it large enough to fit over the top of an IKEA king-sized bed. (If anyone has any sock-yarn leftovers that they don’t need anymore they would be well-loved here!)

Milo must investigate the blanket on the bed. 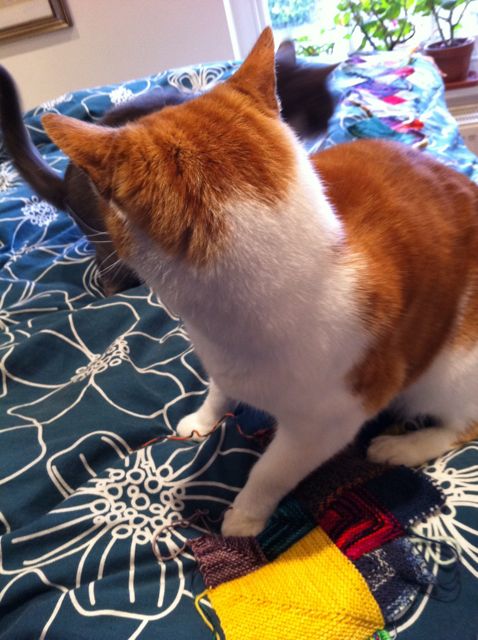 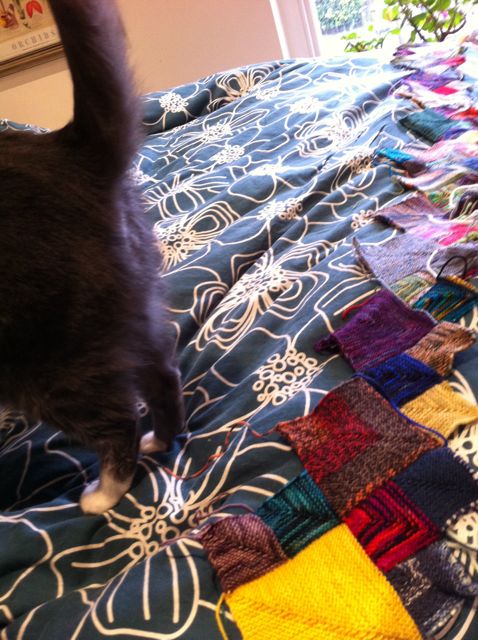 Milo decides that everything is better with cat butt. The End.

Since moving here Christmas has become a smaller affair.  Fewer parties (the hubby’s work only does parties for employees, not partners), fewer presents (shipping is just too damn expensive to/from the US!), less decor (no lights outside).  The funny thing is that of all of it I miss getting presents for other people the most.  In the US I would start shopping in January for Christmas.  I LOVE buying and wrapping presents!  It’s about a million times harder here because A.) Everything needs to be physically small to be able to ship it B.) Also not too fragile C.)Things just don’t go on sale or clearance here like they do in the US, thus everything is more expensive too.  I’m not complaining about getting fewer presents, rather about being able to give them.  My favorite year was one that I got a passel of Christmas stockings at the after-after-after Christmas sale (like in February) for mere cents each.  I then filled these stockings up with fun, small things (they were pretty good-sized stockings) and sent them off to my friends.  They were heavy and a bitch to pack, but they were so well received….  I would like to be able to do that again sometime (and I wish that I had taken pictures of the dozen or so stockings that I filled that year!). 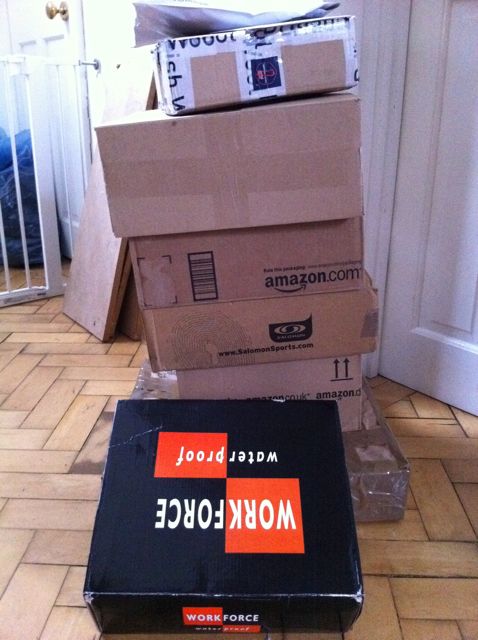 This was the bulk of the Christmas shipping this year...

Last week was a week of packages.  I got a book that had been shipped on the 15th of December for Christmas on the 5th of January (yeah, the shipping in this country was that messed up over the holidays! I also got a rockin’ package from my friend Tini in Germany.

This Awesome bag with the totally rocking button that Tini MADE!!

Two books that Tini sent. It was a very cool box (and I have eccentric reading tastes, I know!) 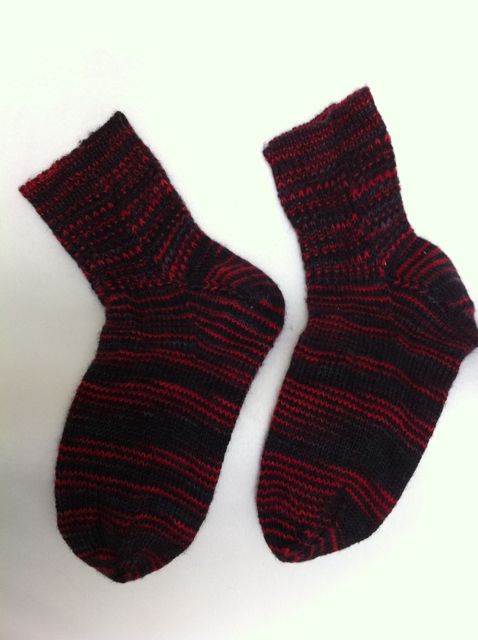 Socks! Tini made me SOCKS!! (there is a picture around here somewhere with them on, just can't find it right now, but they fit PERFECTLY!) 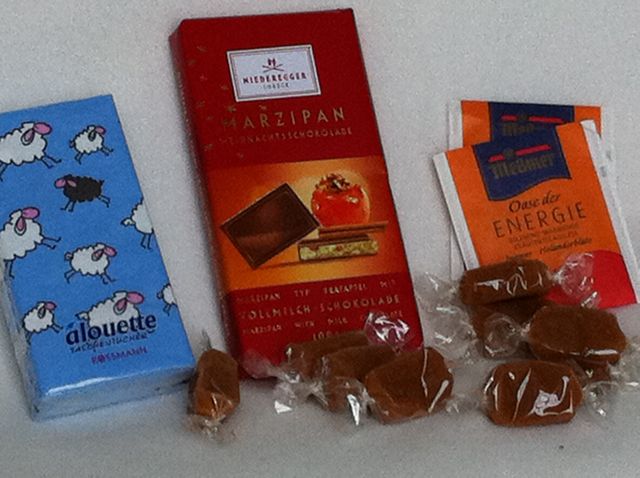 Candy, tea and tissues. To appease the snot monster???

This year instead of going to Chicago for my annual must-go-somewhere-insanely-cold-for-my-birthday trip, I am going to Finland.  My friend Malin has promised to try to teach me how to cross-country ski (and she says knit socks at the same time, I’m dubious about this idea given my coordination) and that I will get to see lots of snow.  I have my long underwear ready to go!  I don’t leave until the 11th of Feb as I am currently watching the neighbors 2 dogs as well as my 3.  The neighbor gets back on the 11th so that she can walk Mal during the day while I am gone.  I’m quite looking forward to going back to Finland and seeing Malin and Barbro again.

Now, here are some random photos of, what I call, Peace on Earth from an Electric fire and the cute dogginess that is going on around here right now..

Kali and Fluffy, our dogsitting charges for the next month (Kali is Malcolm's "girlfriend") 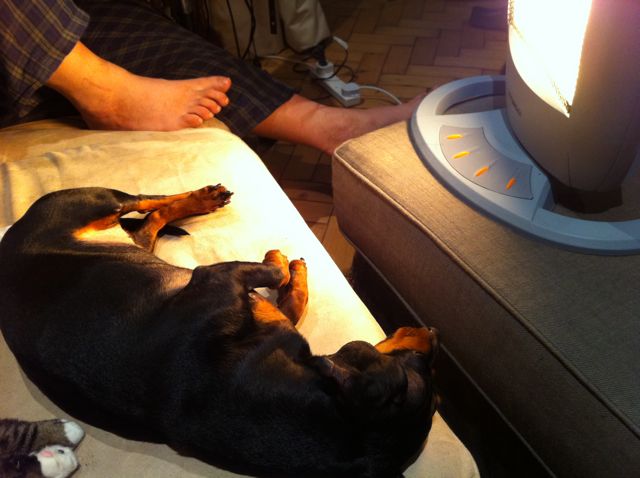 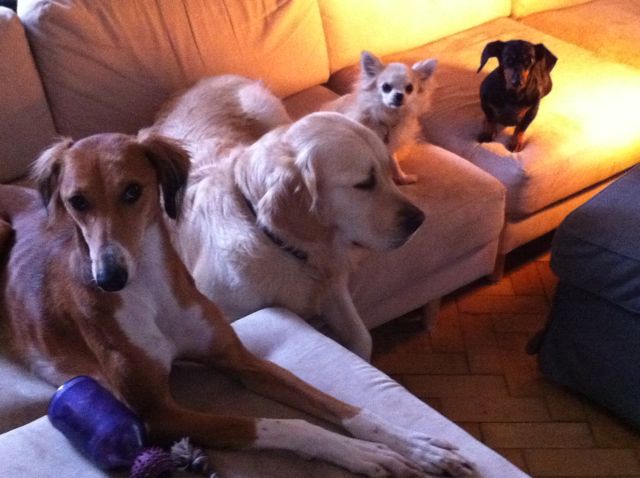 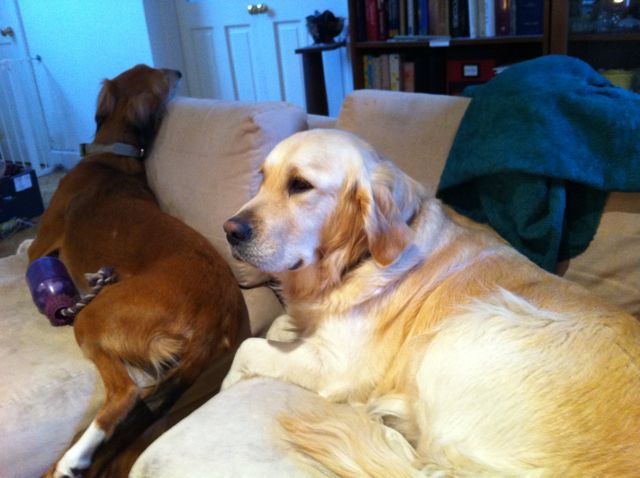 Kali is nervous about the couch as the sectional tends to push apart at that end and she's ended-up on the floor a couple of times already! 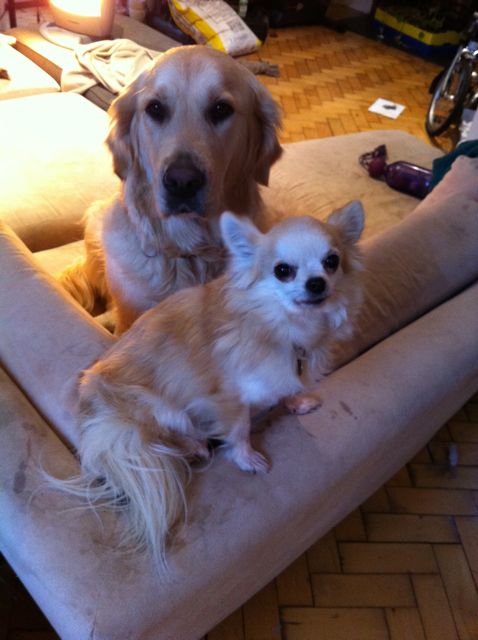 The blond sisters. They really are that cute in real life too!

And last but not least, a gratuitous cute Meara shot!

5 thoughts on “Christmas and Pups”