So I have started my spinning again.  I couldn’t for the first few weeks that I was here because the wheel was in transport.  Then once it got here I needed to find the rest of the bits of it as they were packed away in the bewilderingly labeled boxes.  By the time that I finally found them, it was time for Christmas knitting and crochet!

Which I am now avoiding by spinning.

I had a hard time deciding what I was going to spin but finally I settled on this:

It’s from Easyknits and it’s called Winter Berry.  It’s 80% Superfine Merino and 20% Black Diamond (Carbonized Bamboo).  I think that this was a club fiber and it is really lovely to spin.  My night-time photo doesn’t show it very well, but it’s a lovely blend of grey, a dusky blue and red.

So, you might be wondering, what is it that has me avoiding it so strongly?  It is this:

Yes, this is the “Cars” themed blanket that seems like A.) it sucks down yarn faster than a cargo van sucks down gas driving into a 30mph headwind B.) it is doomed in its current incarnation (mostly because of A.).  I started on this blanket in my usual fashion which in this case meant asking my mom how big a 3-4 year-old is.  I asked her because she’s had 2 of them and I’ve had none at this point.  After getting to see said child this week, I realized that this blanket would (in its current incarnation) be too large for him to carry.  Doh.  A shocking lack of knowledge about small children strikes again!

In completely unrelated news (other than, you know, it’s the Christmas season thus winter here in the Northern Hemisphere) it snowed last night. 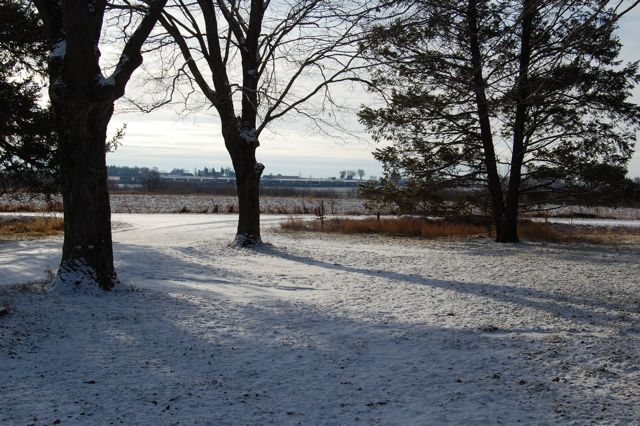 This is one of those pretty, white dusting snows rather than the last one which was just confused rain.

Snow makes everything prettier, even Micheal!

The view of town.

Have a great day!

2 thoughts on “Elf on Strike”