Today I made an appointment for little Miss Sweetie Pie to get spayed next week.  Since it is warming up rapidly, I want to get her out of my room!!!!! She is a teensy bit destructive and annoying and I am tired of being scratched and bloody (it’s how she shows her affection… purr, purr BITE!). However, I can’t put her outside in her current state as I’m sure that she would be preggers faster than you can say, “What’s your sign baby?”. 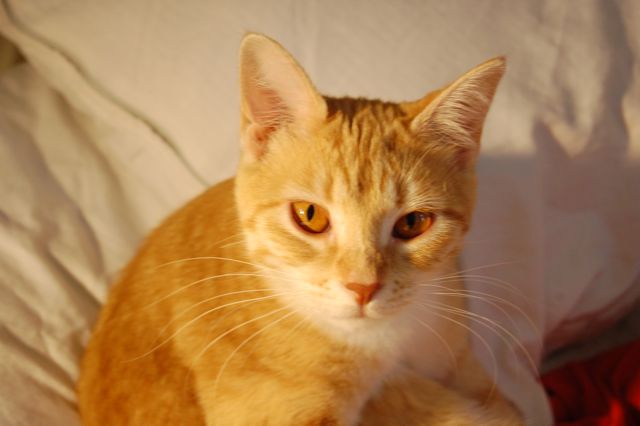 What are you lookin' at?

In other news, I will be attending my first fiber festival since being back Stateside.  It’s called Shepherd’s Harvest and it’s held in Lake Elmo, Minnesota.  My mom is going with me and is thinking about taking a weaving class while there.  I’ve never gone to this festival before and I’ve never gone to a fiber event with mom, so this should be interesting on several different levels!  I heard about it because Deb Robson tweeted that she is going to be there and I plan on catching her talk on Saturday night.

I have been hooking and knitting, but that crazy thing called “having a full-time job” has seriously cut into my crafty time.  (Not that I am complaining, I am very happy to have gainful employment, it just means that the crafty doesn’t flow quite a quickly as it was!)  I finished this scrapghan this weekend. 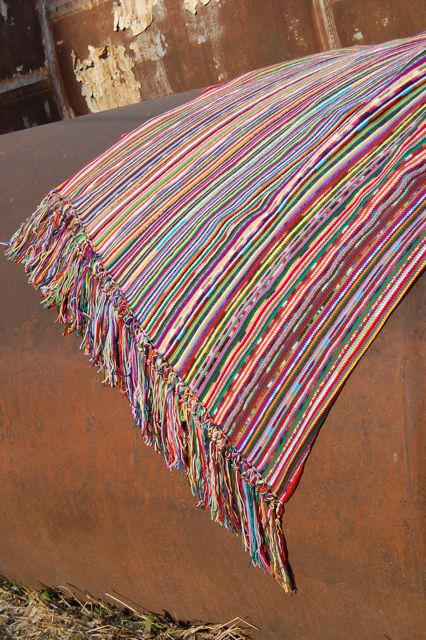 It’s a little different from my usual version in that I experimented with fringe.  I think that it adds a bit of a playful aesthetic to it, but I doubt that I will do it again.  It just got in the way a lot and was really time-consuming in the end.  It’s going to be raffled off by the Ackley American Legion Auxiliary in the coming months as a fundraiser. 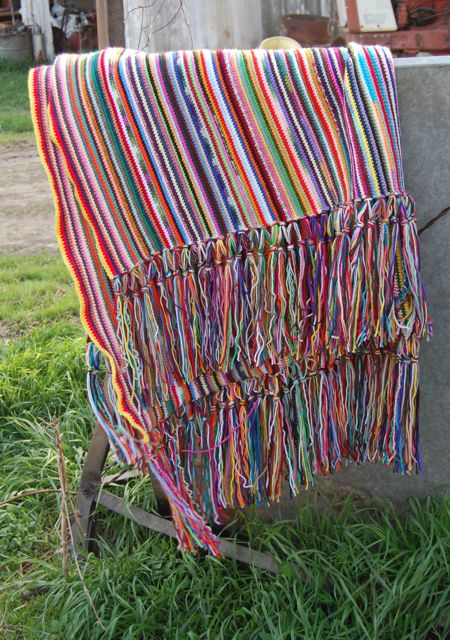 I thought for sure that it was headed for the frog pond because I couldn’t find any more of the red yarn.  I looked in Michael’s and JoAnn’s and Hobby Lobby and not one of them carried this particular shade of red.  Guess where I found it.  Wal-Mart.  I detest going into that store, but it’s really the only thing sort-of local and while I was in there looking for something else I just moseyed down the yarn aisle and there it was, bright as day, just sitting there!  It’s a good thing I really didn’t want to rip it out as now I have enough yarn to finish the blanket!  Woot woot!  And, I am planning on taking a little weekend trip out to Chicago to see Sarah and her crew in the next few weeks so hopefully I will have it finished by the time I get there and can give it to the little guy in person.  Just in time for summer…

One thought on “Doctor Strangelove”