In the coming weeks, I am planning on doing something a tiny bit different with the blog.  Don’t worry, I plan on still giving you lots of updates on what I am knitting, spinning and crocheting, but I am also going to be giving you a little virtual tour of Iowa.  You see, I travel around this great state a lot each week for my job, passing many interesting places on the way.  I intend to stop by some of these places, both really famous and not so famous to give you a taste of Iowa’s history and heritage.

My first stop happened on a beautiful morning a couple of weeks ago.  I had passed by the sign for the turn to Hogback bridge a number of times but this time my earliness as well as the absolutely stunning morning light made me make a quick detour to go see one of the famous Bridges of Madison County.

Now, if you haven’t already heard of them, I feel like I should really direct you to the very famous book and movie that are sort of about them.  Really, the bridges act more as a setting or as a catalyst than main characters in the book and movie.  The story is actually a love story set in 1960’s Iowa, which in itself is a little unusual.  There aren’t that many major novels set in Iowa at all.  Anyway, the bridges do play a major role in the movie and did make this little corner of Iowa very famous for a while.

So, back to my story.  I’m driving my this turn that I’ve passed a good many times and I decide to just do it.  I hit the brakes so hard to make the turn that I end up with Mountain Dew all over the car (You see the lengths that I go for you?? Ispilled Mountain Dew for you!!).  The gravel road that I turned onto is unusually steep and twisty for Iowa.  As I make my way up the hill, the gravel dust billows out thickly behind me.  I follow the signs that are posted at every intersection until I finally find the bridge.  It’s in a valley of sorts and is now positioned so that I cannot drive over it.  There is a modern concrete and steel bridge very close by for the traffic to go over. 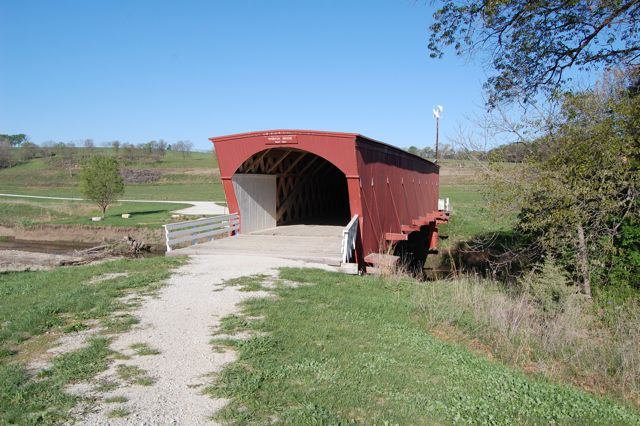 There’s no one around this beautiful early spring morning other than me and the birds.  A total of one pick-up truck passes by on the road the entire time I am there, politely slowing down as he passes so as to not suffocate me in limestone dust from the road.  This is not the first time that I have seen these bridges, but this one seem cleaner and nicer than I remember them being.

This was explained later as all the bridges were renovated in the 90’s. It makes sense as nothing made out of wood is going to last in Iowa’s weather for very long without some serious maintenance.  Add to that, most of these bridges were still being driven over by cars and trucks and farm machinery (when it could fit) up until a few years ago and you have a recipe for some serious work needing to be done.

I know that a lot of my readers live in places where 1884 doesn’t seem that old.  Hell, I’ve lived in a house/chapel that was older than that myself in England!  However, for Iowa, this is considered a pretty old structure, especially for a wooden one.  To give you some perspective, Iowa had only just become a state about 40 years prior.  The reason given that they covered these bridges in the first place is that the timbers on the floor of them were much larger and more expensive to replace than the ones in the building above them.  Given that Iowa has never been known for its lumber, I can actually believe this.  Wood, especially lumber, used to be difficult and expensive to get here. 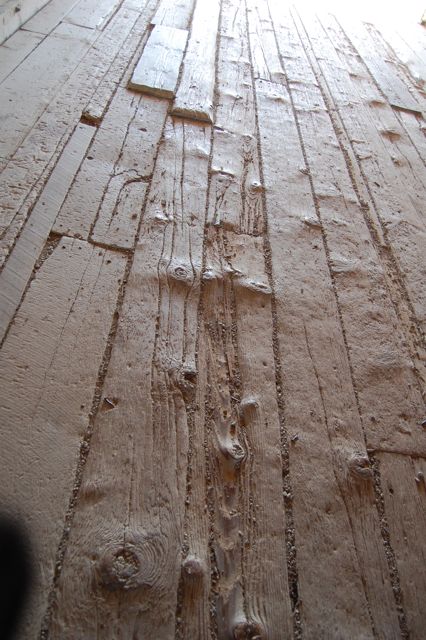 The bridges were used for lover’s meetings long before the book was written about them.  Young couples would carve their names or initials into the wood on the inside of the bridges.  Now they uses sharpies and spray paint, though there are still a few traditionalists amongst the romantics.

The folks preserving these bridges have tried to funnel this urge to mark the space, say, “I was here.”  I’m not sure how well it’s working… 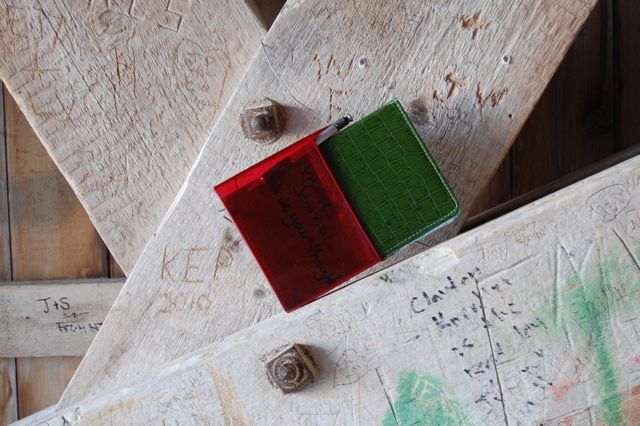 The ends of the bridge are painted white.  It used to be that a lot of things that would be considered navigation hazards in the dark were painted white so as to not have folks running into them.  This is the reason that a lot of the trunks of the trees leading to the Southern plantations were planted white, to make it easier to get to the house without running into one of them.

Hogback is one of the few bridges remaining in its original location.  Most of them had to be moved to make way for more modern bridges.  However, I think that Hogback’s location in a very out-of-the-way place has helped it to stay put.

Most of the other bridges were named after the families that lived nearby.  Hogback didn’t have anyone close by so it was named after a limestone formation nearby.  Or so they say.  No one really knows the reason for sure.  I personally like to think that there was a pig involved with the story somehow:-)