This summer I have gotten the chance to attend two fiber festivals near where I live.  The first was Shepherd’s Harvest which is held in Lake Elmo, Minnesota.  This was the 15th year that Shepherd’s Harvest had been held and it shows.

There were 3 buildings of vendors…

a building of sheep and goats…

and one of Llama’s, who were also having a show at the same time. 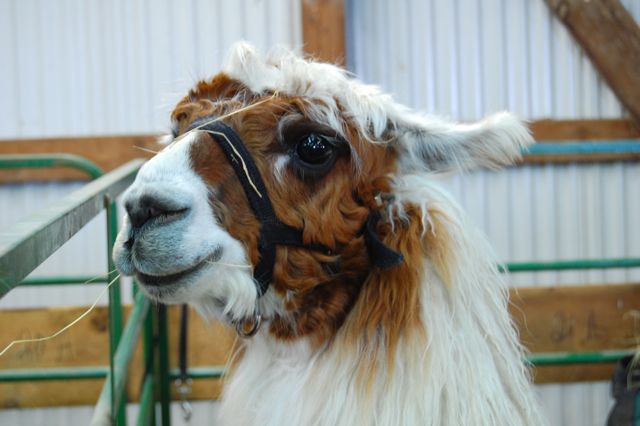 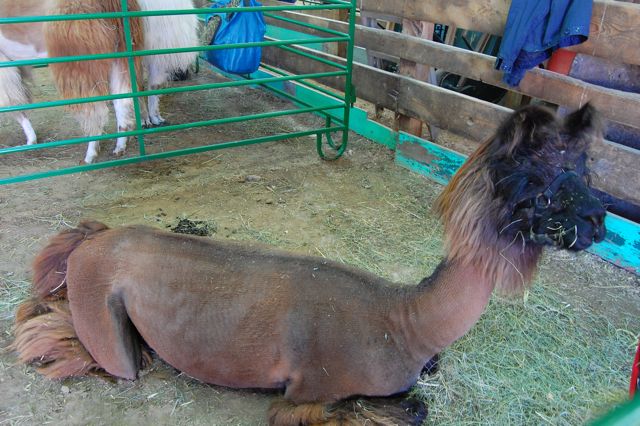 Some of the Llamas were even being sheared. 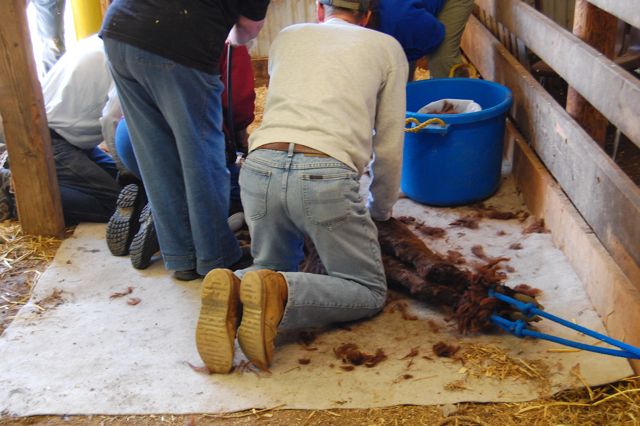 There were lots of cute, fuzzy butts… 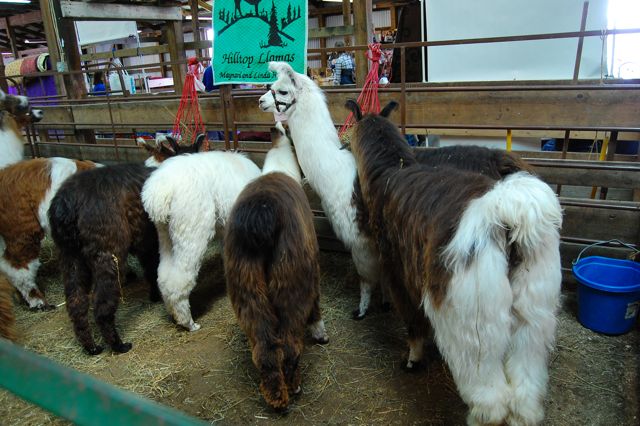 And tons of adorable angora bunnies for sale. (I really wanted to bring some home with me!) 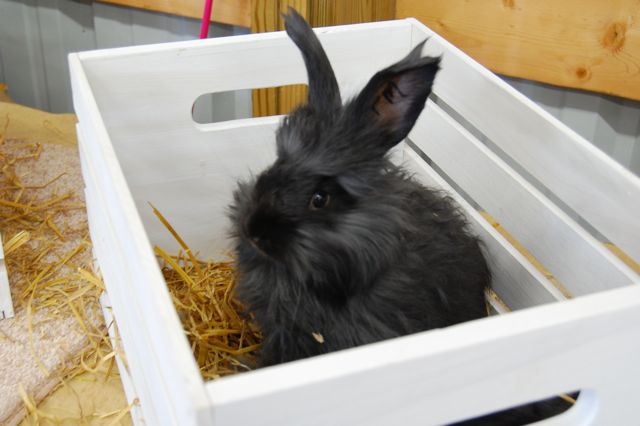 They had classes and talks…

and llamas wandering around with packs on their backs.

There were fried pickles and Walleye for sale…

and exhibits of photography and yarn making prowess. 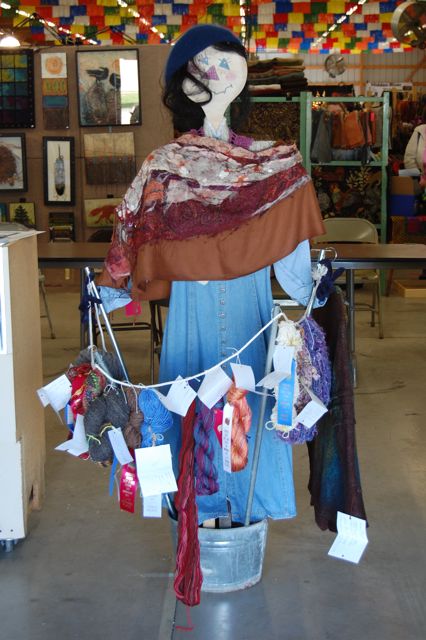 There were also sheepdog demonstrations, and this one unlucky guy in the cone of shame.

There was even a wool yurt! 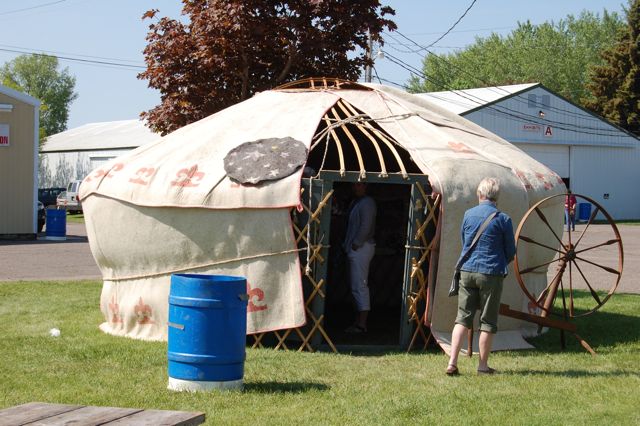 Of course, there were lots of things for sale and I got a few of them:-)

This is a Wensleydale fleece that I got:

This is some very fun yarn that I found…

I also got a cone of this sock yarn in grey…

and a whole pile of mill ends of sock yarns in a bunch of different colors!

There was a lady there selling prairie settler style bonnets.  Given that I will most likely be doing period spinning soon, I thought I should get one.  They are not flattering and I can completely understand why Laura Ingalls was constantly ditching hers.  You have NO peripheral vision in them!  I would get totally paranoid that someone was sneaking up on me. However, they probably really did the trick of keeping the sun off of faces and necks, which was their purpose.

I also got a few things which didn’t get photographed, most notably the book Knit, Swirl! by Sandra McIver (which I didn’t photograph) and a few gifts for friends.  I also got something very cool for free.

Yep, I got a case of the giant pickle jars from the folks selling fired pickles.  I put the Mountain Dew can next to them for perspective as they are really big.  I love jars and I just couldn’t resist asking if I could have them when I saw them waiting with the garbage.  I know, I’m a weirdo:-)

The second fiber festival that I’ve been to this summer was the Iowa Sheep and Wool festival.  It was held in Adel, Iowa on a wickedly hot weekend, which I hold partially accountable for the reason that there weren’t that many people there.  A bunch of the members of my guild were there.  Many of us brought spinning wheels or drop spindles to demonstrate in the spinning and weaving demonstration area.  (We’re wearing the hot, purple shirts)

One of our guild had a stand there where she was selling wool from her sheep among other things.

There were sheep and goats there, but I only got a picture of one with a great smile!

There were also a passel of collie puppies getting introduced to sheep.  They were cute in only the way puppies of any breed can be. 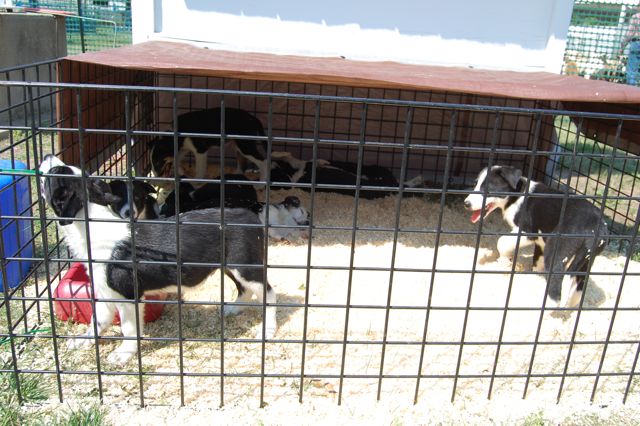 I didn’t get a lot of stuff here and what I did get, I forgot to photograph.  It was just so stinking hot that you really didn’t want to touch a lot of fiber because it stuck to your sweaty skin.  This is a much smaller festival than Shepherd’s Harvest, but it is also about half the age.  It is also much closer for me to attend.  It was only about an hour away from my apartment in Ames.  I’ll definitely go next year, but I will pray for cooler weather!