I’ve not written here for a while. Parts of this had to do with grad school. Being expected to write nearly constantly caused me to avoid it when I could. It wasn’t just this blog that has felt the inattention, but also friends who I would somewhat regularly write too via either snail or email.

Spring break meant a car trip to Florida to visit friends and to introduce a new friend to lots of old sites as well as see some new ones for me.  I finally got a chance to see the American Gothic house in SE Iowa!  Did you know that they have outfits that you can dress up in and pose in front of the house (pitchfork included!)?

It was a little windy that day!

Of course the obligatory knitting picture in front of it!

We went to the beach (as one does) as well as a lot of museums and things like that. 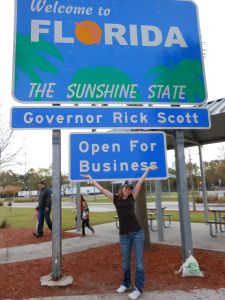 She was excited to finally be in Florida!

We did do some educational stuff while there!

Seeing her joy in watching the orange pickers made my trip! 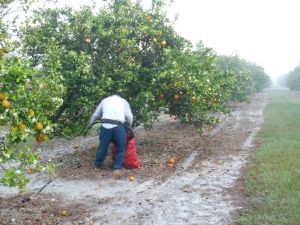 My friend kind of freaked the pickers out with the camera so early in the morning until she explained that she was just interested, not from the government!

I also had the great joy seeing something that I have had a (small) part in organizing come to fruition.  The 2014 Iowa Federation of Weavers and Spinners annual Spin-in featured Deb Robson as the speaker.  Two years ago when the organizers at my guild mentioned that they needed a speaker for the 2014 Spin-in and I just happened to mention that I knew Deb, I doubt that they expected the amazing turnout that we would get.  It was a pretty full house, which for a spinning event in the Midwest, is no small feat.  It was a great weekend and Deb’s talks were well received as well as her class on rare breed wools taught the next day.  It was great to see Deb again under less stressful circumstances.

I however have been doing all sorts of things of late not at all related to grad school and I am finally over the writing avoidance. I’ve made a (ahem) lot of jams and jellies and pickled things. A lot. And then I moved. I am not the favorite person of my friends who helped me to move right now. I now fully understand why canning has traditionally been the focus of folks more settled than I am currently as jars of food are heavy and a pain to move since they are not really stackable. However, survive it I did and I have even added to the collection as apple season is in full swing here in Iowa.

These are some of my canned goods selection before the move.

I have still been knitting. I am attempting my first full-on, adult-sized, honest to blog cardigan sweater. Cables and all. I am making it out of one of the few yarns that I have enough of in my stash to make a sweater from. I got it in England at the John Lewis New Year’s sale and it works beautifully for this pattern. If you would like to check it out, here is a link. So far, it looks like a hot mess of strings and parts but I am told that this is completely normal for this kind of construction. I’ve worked on a few socks and other things over the past few months but nothing big to tell you the truth.

The past couple of days I’ve been helping dad extract the honey that we got this year from the bee hives. It is really amazingly light honey and sweet enough just to eat up. I also decanted some previously harvested honey that is much darker into containers smaller than a five-gallon bucket. I think that this was a time that my folks were happy to have someone who owns a wealth of canning jars as we didn’t really want to load all this darker honey into the honey bears. It was a very sticky learning experience and makes me want to learn more about the bees and beekeeping (collective moan from anybody who helps me move). 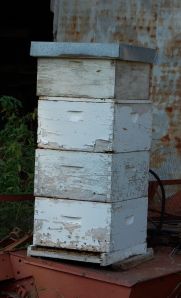 The bees, very busy helping to clean out the combs that we extracted as well as the extractor. By allowing them that honey we hope that it will help them make it through the winter better.

In case you haven’t guessed, I am living at the farm once again, where we are gearing up for the harvest of more than apples and honey. The corn will be coming out of the fields soon and my brother and father have been trying to get things ready for the annual chaos that is harvest. Already the corn choppers have come and gone, leaving behind a massive tube of silage this year (dad decided not to put it up in the silo). 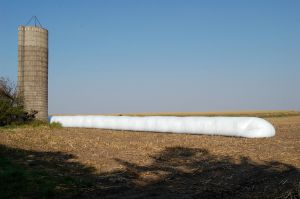 But really, what has mostly been going on is living a life. A life that may go through more sugar and sock yarn than is typical, but one that is typical for me. I hope that I can share more with you in the coming weeks than I have been. Lately I keep finding myself reading blogs and Ravelry again which I had stopped doing in the depths of grad school. 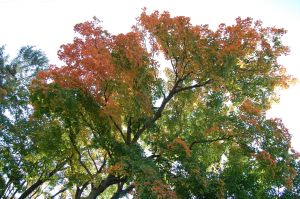 Already the maples are flaunting their colors.

One thought on “Off Camera”