Both C and I are morning people, so the early morning isn’t particularly difficult for either of us.  We are both up in the five o’clock hour and fully ready to go before the clock turns to six am.  We go out to the truck and trailer which has already been thoughtfully provisioned with water and hay by the ranch foreman the previous evening and is parked and ready for the sheep to be loaded.

The loading goes quickly and I count the sheep as they go into the trailer to make sure that there are still twenty-three of them.  The have plenty of space in the large trailer and clean straw to bed down in for the trip.  Our goodbyes are brief in the brisk morning.  I go to shake the foreman’s hand and he envelopes me in a hug.

We head-off down the interstate towards Helena and I am finally able to see the area we had traversed earlier only in the dark.  Traveling South we make our way gradually out of Montana.  There is a LOT of road construction so C drives through the worst of it.  We change places after we stop for a break at Wheat Montana, a fabulous bakery that a local farmer had started after becoming disillusioned with selling a commodity.  It’s a fabulous example of a farmer taking their raw ingredients and making them into a value added product that is now sold across the US.

Taking over driving the truck and trailer was a little nerve-wracking at first.  I’m not really used to driving something that large to begin with and adding something even larger to the back was disconcerting.  However the weather was beautiful, sunny and bright and only a little breezy.  And the country that we were passing through was amazing.  The colors and landscape features were mesmerizing.  We drove through two Indian reservations and past the battle site of Little Big Horn (Custer’s last stand) and many, many little colorful homes of the Native American’s living there.  I managed to not go over the side of the several mountains that we went over.  Going up the mountains was no big deal, it was the coming down that was a little scary.

Eventually we cut through a little corner of Wyoming and make our way to South Dakota.  It is here that we first see the snow from the storm system that we knew was pushing ahead of us (the same one from Denver).  The further South we go, the more snow we see.  We had tentatively planned on stopping in Rapid City for the night but we got there much sooner than we had anticipated and pushed on a little further down I-90, past the Badlands National Park to Kadoka.  There we found many of the hotels were not yet open for the season so it made our hotel selection relatively easy.  We also needed a place that was easy to get in and out of with the truck and trailer as well as a place where we could easily see the rig from our rooms. 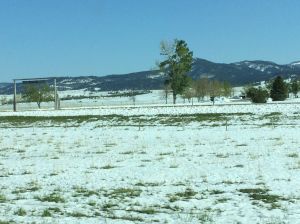 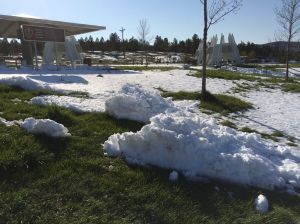 The Rodeway Inn met all of our requirements (being open and with easy parking) and we checked in and then went to dinner.  We pulled the rig back in and parked in a place easy for us to both see from our rooms and prepared to settle in for the night.  We gave the sheep their water and broke up the bale of hay that had fallen out of the attic of the gooseneck trailer during a particularly bumpy part of the trip.  The sheep were are pretty relaxed about the trip.  It was cool out but not cold or rainy and they had hay and plenty of space to lie down if they wanted. 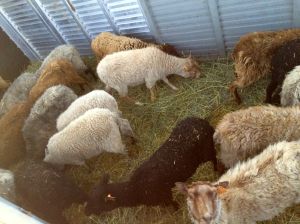 Sorry about the blurry picture, it was taken with the iPhone peeking through the ventilation at the top of the trailer.

We all turn in for an early night.