Since my mother’s death at the end of February, I’ve had a hard time knitting.  Most of my knitting projects require a certain amount of attention paid to them, and I guess that I haven’t had that to give.  I also haven’t been able to read an entire book for similar reasons.  It’s been a strange limbo for me to be in as both knitting and reading have long been part of my daily routine.

I’ve been searching for the project that could break through this undefinable barrier that I have.  Socks, even the simplest and most vanilla, are too fiddly or just not all that appealing.  Lace can only be worked on only for the very shortest of periods before I become frustrated and stuff it away into its project bag.  Even my crochet scrapghans weren’t working for me.

I often go to a thrift store that is close to where I work.  It’s run by volunteers from a group of churches in the area.  Families will frequently donate whatever is left over from an estate to the store.  Auctions and estate sales in this area often don’t net enough to warrant the amount of work involved, so at least the loved-ones items are helping a local charity.  This means that often a shopper can find literally find everything that they could need to start a home, from a coffee maker to blankets and quilts, and everything in between.  Even unfinished knitting and crochet projects.

I’ve found almost finished baby blankets made out of vintage Caron Dazzleaire (which I gave to a friend who also crochets as she knows a lot more people having babies these days than I do).

I’ve found partially knitted sweaters with the needles still in them but with no pattern.  I find lots and lots of leftover yarns, which go into my massive scrapghans eventually.  But one thing that I have found over and over is granny squares.  At this store, they are usually sold by the gallon ziploc bagful and usually are only a quarter.  Just a quarter for anywhere from twenty to forty granny squares.  I have always purchased them when I have found them.  Sometimes they are relatively fresh, having been made only in the past year or so, the colors or types of yarn giving them away as being recently made.  While other sets of squares have clearly been stored for some time, the yarns of the acrylic squares having long been flattened into a uniformity not usually found in newer versions.

It is to these forlorn remnants of another’s life that I have suddenly been drawn.  I have found myself trying to get the fifty or so of them that I have to a uniform size.  I have been having fun with colors as I need something to work on that is cheerful and easy.  Adding rows of clusters of double crochet to existing squares seems to be exactly what I needed.  I hope that the women (they are always women in my head) who made these squares originally would be ok with what I am doing.  I think that most of them would just be glad that someone is putting the squares towards what they started and were unable to finish and that they were bringing happiness to someone, even if it isn’t the original intended recipient. 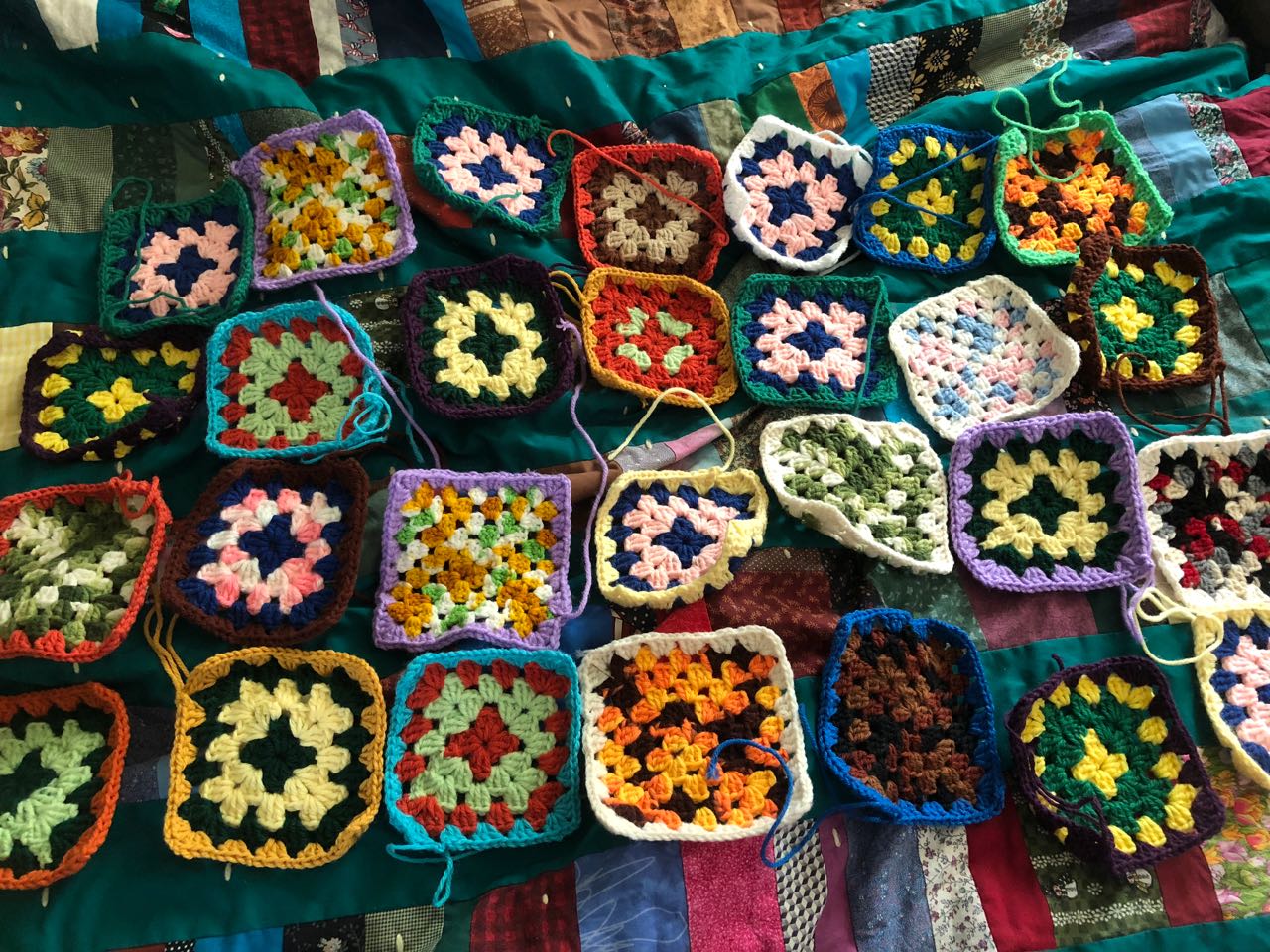 2 thoughts on “What We Leave Behind”