This weekend was a busy one for me. My husband and I flew to California, me from Orlando, he from London, for a wedding. The wedding was for, well, two people whom I had never met before, but my husband seems to like them and he is generally not wrong about folks (with one pretty glaring exception in my opinion, but that’s another story altogether) and well, how often does one get to say, “I’m flying to California for a wedding in Lake Tahoe,” in your life? I didn’t think so, me neither.

So, I set out with hopes held firmly high. Fly out to California all on my own (which I am still amazed that I can do without getting lost as hell). Go to a wedding in a fancy resort town, have fun! Right? Huh.

I had a horrible time just getting to the plane to begin with. The bus ride from my usual parking lot took twice as long as usual, and unseated me with many abrupt stops. Checking-in in the United terminal cumulated with me being accused of trying to steal my husbands frequent flyer miles by a gate worker. My husband had tried to upgrade me to first class for the flight from Chicago to Sacramento as a surprise, but hadn’t been able to sign a needed form to authorize it. It made for a very confusing and irritating time for me, and I just made my flight.

Now, the Orlando to Chicago flight sucks in the best of times. It is full of (usually) very small children who are over stimulated and tired and quite often, sunburned. I don’t know if it is a trait of Chicagoan’s, but it also seems that the children that are taken to Disney on this flight are often still too young to go to Disney! Ok, for all you parents out there, if your child is still wearing a diaper, it is too young to appreciate Disney. Just telling you. They will not remember it, so you just as well go to Club Med or some other appropriate and expensive resort that you will enjoy and save Mickey till they can poop without you having to clean it up!

However, as the pilot is telling us this, I was in the back thinking, “Fuck the upgrade, just give me a tranquilizer gun!”. I had a child of DOOM in front of me. No, not a baby crying, they don’t bother me to much (I mean, half the time in coach I want to cry myself, so I don’t really blame them….) but a full-fledged demon in short pants. He screamed, the threw full-body flailing tantrums. He threw stuff at me. He spent 40 minutes of the flight screaming and slamming open and shut his window shade. He went for mine, but this is one point where dog obedience actually came in handy (cause God knows it never came in handy with the DOG!) and I said a loud, firm, “NO!” and he sat down faster than Micheal the wonder dog ever did in obedience school days. It was only then that the mother sitting right beside him gave him a firm talking too. Ugh. So, for the 3 hours or so that it takes to get to Chicago I spent trying to stay calm so that I wouldn’t stuff a child in the overhead bin.

My notes, trying to preserve my mind

However, one thing that I noticed, was that the clouds from hurricane Hanna looked a lot like an unprocessed fleece, with the little waves in it and the right colors. I was so geeky, I even took pictures of the pretty wool-clouds from the airplane. 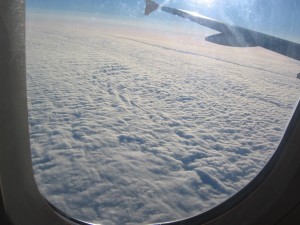 I also tried to take a picture of myself crocheting the new travel baby blanket.

I got to Chicago and made it from one plane to the next with even enough time to grab a piece of overpriced pizza on the way. I get on the plane, sit down and settle in for a long flight. I am just taking out my crochet, when the mother and devil child start walking down the aisle. And then sit down directly behind me.

Oh holy fuck, who did I piss off?

I mean, now this little terror can kick the back of my seat. Which he does, for two hours straight. He also treats me to the rest of his screaming repertoire, including throwing things and flailing until his mother gets up for the proverbial dart gun to take him down. I don’t know what was in that stuff, but I was about to ask for some of it for myself at that point. But, it blissfully took him down until about 40 minutes before we landed.

Chris was at the Sacramento airport waiting for me when I landed. This airport is really small, it makes the Des Moines airport feel like O’Hare or something, it is small. While we were waiting the surprisingly long amount of time it took for our bags to arrive, I took a picture of the traveling blanket and the magazines that I read to show how much I had gotten done on the way there.

It's still a long ways from FL to CA!

We drove to Lake Tahoe that night, about a two hour drive, which I drove since Chris was, well, falling asleep at the wheel. It was dark so not very exciting. We arrived at the hotel around 1:30 in the morning California time, 4:30 Florida time. Doh, very tired…

Woke-up early-ish, around 8am to do some exploring. First we went to explore the Donner memorial state park. All I can say is that anyone who tried to go through that country in a covered wagon with freaking OXEN had a much bigger pair than I ever will.

Then we went to Reno. I’m glad that we went, but I will never go there again. It was depressing and slightly seedy. Ok, not slightly, very seedy. I don’t know how Las Vegas is, but this was just sort of depressing. Oh, and they still allow smoking in the casinos. Perhaps I am just so used to smoking not being allowed anywhere anymore that this shocked me.

Yes, I am in the middle of the street...Already good in this area...

We then packed-up and headed to Lake Tahoe proper. Where we were staying wasn’t Lake Tahoe, but very very close to it. So, I got to see and walk in Lake Tahoe for a little bit.

There is a large complex that is at the top of the mountain where the games were actually held. You have to take a gondola ride to get up there, but once there, you can go swimming or roller skating or get some ice cream

We came back down the mountain and got ready for the wedding that evening. It was a lovely wedding, but I have to admit something. I am pretty tired of weddings. I am sure that my outfit was at least part of the problem. My right boob kept wanting to come out and say hi to the world (and the CEO of Chris’ company and a LOT of his co-workers and their spouses) and the shoes that I had gotten the day before somehow were too big for me! Also, I don’t know if it was due to the altitude or the humidity, but after I blow-dried my hair, I had some super 80’s pouf going on.

We left the reception fairly early on in the night as we had an early flight to catch from Sacramento the next day.

Yes I look like shit, I am hung over and tired as hell. What do you think you would look like?

We were originally supposed to fly to San Francisco then from there to Orlando, but our plans got a little changed when we were bumped off the first leg of our flight, and re-booked to Denver. The Denver airport is pretty, and we hung-out for our fairly long lay-over in the red carpet lounge eating crackers and cheese, wishing we were in a European lounge (they serve alcohol and real food).

We got onto our flight to go back to Orlando, only to have it delayed for an hour because they didn’t have enough people to load the baggage into our plane. All I could think was at least I don’t have the devil child anywhere near me on this flight! We got home around midnight, and back to our house around 1am. The puppies were quite glad to see us, as was a meowing Jiji (Or maybe she was just hungry, it’s always such a close call with her. I sometimes wonder if she wasn’t a member of the Donner party in a past life, she just sort of looks at me like she’s deciding where the tasty bits would be…).

It is very good to be home.

P.S. Tech support is home, hence the reason half the photos are the size of an eraser and the other half are of normal proportions. You have to pick your battles……..