My United Airlines flight leaves for Rhinebeck on the 16th of October.  Today is the 5th.  That means that I have 11 days until Rhinebeck (well, technically it is longer since the 16th is a Thursday and it doesn’t start for me until Sat., but that is beyond the point!)  I am taking a class on choosing the best fleece since the drop spindle class was already full by the time they received my registration.  I would love to have taken pretty much any of the spinning classes, but most of them required bringing your own wheel.  My Ashford isn’t going to travel again until it moves to the UK if I have anything to say about it.  I am taking 2 suitcases for yarn and fleece purchases (one inside the empty other one on the way there, I know that you have to pay to take bags with you now….)  The computer will be traveling with me so y’all will get roving reporter updates of Rhinebeck from be whenever I get a bit of Internet.  Maybe.  I may be just so busy and excited that I forget how to post!  You never know….

In other news, Jiji the cat has decided that it is safe to move about the house.  Jiji is “Chris’ cat”.  She joined the family at the same time that he did and has been with him her entire life.  When she moved in, she decided that the safest part of the house was the 2 back rooms and the bathroom, and that is where she stayed.  Now that Micheal has been gone from the house for a while, she has been venturing further out a little more each day.  On Friday she spent a bunch of time in the kitchen. On Saturday she was sitting on my spinning chair by the door to the living room.  Now, she is sitting by me on the couch.  She has never been out here without being forced!  Belle has been taking her cues from Queen Jiji and is sitting on the spinning chair herself (Belle is a lovely cat, but definitely a follower).  All of the newly collared cats seem to be ok with their jingly neck accessories as no one has removed them or even seems to notice them. 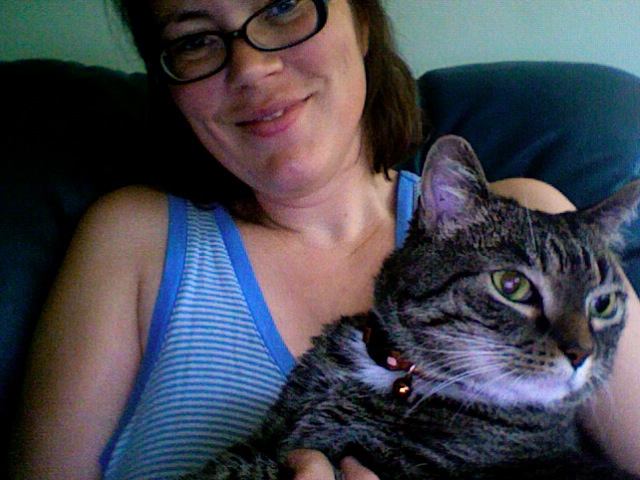 Jiji and Sarah on the turd

So, to give you an idea of how things are right now in the house…..  Meara and Weezy are sitting beside me on the seat of the couch.  Jiji is sitting on the back of the couch right behind my head purring.  Milo is all over the place bringing her unique flavor of destruction to anything she can get her paws on (mornings and late evenings are the worst for this, she just sorta goes nuts for a few hours).  Belle is sitting on the spinning wheel chair and Willma is hiding in the bedroom closet.  All three parrotlets are awake, happy and eating in front of me.  This is a happy house.

As promised, I watched P.S. I Love You last night.  It was a sweet story, but for some reason, it just didn’t have the chemistry to make it a great movie.  (At least not to me, I love Catch and Release but a lot of people thought that it sucked.  Maybe I need to stop watching so many “man-in-life-dies-woman-gets-over-it-with-help-from-friends-and-new-love-interest movies.  It may start to freak the hubby out:-))

Michael’s has the glow in the dark yarn on sale, and it indeed, glows in the dark.  Come on, you know you want some of that!