Tuesday night at Yarn Therapy I got a late birthday/early moving/random happy day gift from Terri Pike the fearless leader of our group.

It is a felted rock. 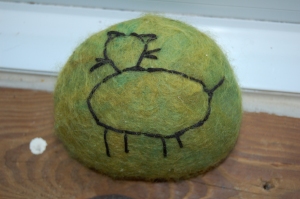 The cat embroidered onto it symbolizes “a nice lady lives here” in hobo signs.

(For more hobo signs, just google “hobo signs”.  I told Terri that the “Barking Dogs” sign would have been a good one for me too:-))

I bought 2 of Terri’s original College Park felted rocks for Christmas presents.  One went to a friend and the other to the hubby.  Theirs didn’t have anything on them, just felt.

Neither of them “got it” and they are two people that are artistic enough that I would expect them to “get it”.  It was sort of disappointing….

Anyway, I thought that my felted rock was the coolest one that I had seen yet and I absolutely adore it.  Although, Milo for some reason doesn’t like it.  Twice she jumped up on the window sill to push it off while I was taking that picture.  I was not such a nice lady to her for a little bit…..

Tonight is the Happy Hookers in Orlando.  It is at the Fashion Square Mall in the Panaera Bread.  Be there or be, well, boring!