It has finally turned grey here in the Southern end of England and sort of cold.  In fact, if I didn’t have a calender on the wall I would think that spring is now going backwards except for a few things.  One is that the peonies are getting ready to bloom.  I love peonies.  My grandmother had these huge clumps of them growing near the road at her house.  They were these huge pink and white striped flowers as big as a cereal bowl that smelled like heaven.  After my grandmother died, I transplanted a bunch of them to my parents house, but it is a bit colder where they live and it has taken more than a few years for them to get back up to speed, let alone have blooms the size of bowls.  Since I transplanted the peonies, I have yet to get to see them bloom.  I haven’t been to my home in Iowa at the right time, no where close to it to tell you the truth. 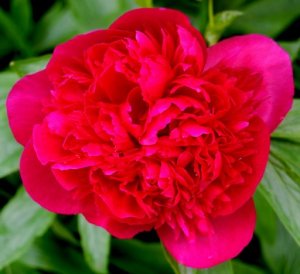 In order to brighten things up around here a bit we added a new member to our family.  Since we were unable to bring the parrotlets back with us (they have a nice new family now, I didn’t just let them go or something) but we had their old cage here we went out and got a parakeet!  They call them budgies here.  Anyway, our parakeet/budgie is named Macho and I am hoping that he will learn his song.  I just find the idea of a little blue parakeet singing, “Macho, macho man!  I want to be a macho man!” so appealing on so many levels.  I know, I’m sick on so many levels! 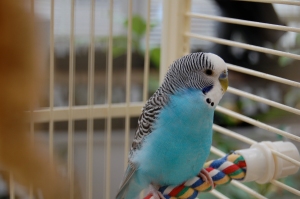 I’ve started on a new crochet project.  I know, what do I need another new project for right?  But I didn’t have anything that was good and mindless to work on while we are watching season 2 of Buffy the Vampire Slayer.  By the way, season 2 is much better than season one, though you do need season 1 to understand a lot of the plot lines.  Oh, where was I?  Oh, yes, right, the new project.  It is a great big granny square afghan.  You know, where the granny square just keeps getting bigger and bigger.  It is the perfect brainless project for Buffy watching. 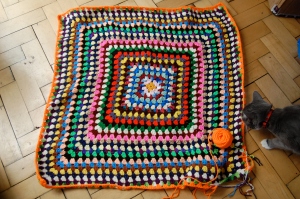 I’ve started another knitting project.  This time it is a cabled scarf.  I guess I had a fairly quick learning curve on the knitting thing as I totally skipped the whole “really long garter stitch scarf” (for my hooking friends, garter stitch is when you just go back and forth in straight knit stitch, no purling.  It is sort of akin to doing just a single crochet back and forth) and went straight to cabling.  I think I’m doing ok, but it’s really hard to tell other than the scarf is turning out more or less like the pattern that I am using.  I don’t really have anyone who I feel that I can just ask without feeling stupid. And yes, y’all read that right, a pattern.  I think that reading knitting patterns is easier than crochet ones for me for some reason.  Maybe my mind can’t really handle more than knit or purl.  Who knows why this is, but there you have it… 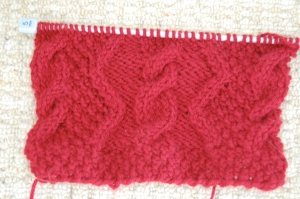 I’ve also had another vampire themed thing going on as I was finally sucked into the Twilight series by Stephenie Meyer.  Yeah, I know, what is it with me and vampires lately right?  Actually, let me answer that rhetorical question.  Right after I moved here I started re-reading some of the Harry Potter series.  It is so different reading them……well…..here than it was at our home in Florida.  There it is very seldom that you feel an old vibe or a…..well….dark vibe.  When you do it is in the forests or on the river and it’s, different.  Maybe (but I’m not sure about this) it’s because the “danger vibe” feels, wild.  Animal even which would make sense given that there really haven’t been a lot of people (I know that there have been people living there for a very long time, but it just isn’t as many as here if you know what I mean) living there for very long.  Most of it’s history is in the wildness.  Whereas here, it’s different.  You can feel history pulsing around you.  Especially where we live, in the Southern part of England.  This area has been settled for a really long time, much longer than the US has been settled.  The church down the road dates to the 12th century, and it’s not all that special around here for it’s age.  There are ruins and walls from houses that no longer exist if you look around a little.  Everywhere there are little passage ways that probably date back to the Tudors that almost seem to whisper that bad things have happened in them and alleys and twisted little roads that may have made sense at some point but now dead end into dark doorways.  I have had more jolts to my subconscious in the past few months with non-understood warnings of danger it seriously made me think that I was going mad for a little bit.  But I’ve come to realize that I’m feeling…..well…..the past here.  I think that this is part of the reason that I am never all that keen on going into the city.  Crowds have never really been all that fun for me, but the city itself has always felt, well, really dark to me.  And no, this isn’t just because I just read 4 rather long vampire books in 4 days, I’ve always been this way about it.  You can ask the husband if you want but he’s seen how I get as the train moves closer and closer to London.  I get…upset? Depressed?  Definitely different.  There is no avoiding the past there, no avoiding the claustrophobic little alleyways that Jack the Ripper haunted in the 1880’s (seriously, the hubby worked and lived in that part of town) or the fact that even on the larger streets it’s seldom that the sun shines directly on you.

Anyway, this has been a very long way of saying that reading books like the Potter series or the Twilight series here feels very different than reading them in the US.  There’s enough shadows and weirdness here that you almost can’t help but to believe in monsters and hidden creatures and dark histories and secrets so old that you can’t even begin to wrap your mind around them.

I now totally get why everyone has alarm systems here.

One thought on “Cabled Obsession”