So, on Saturday we took a bus tour up to Inverness and the Highlands of Scotland.  This is the area that folk always think of when you say Scotland, more mountainous and rugged.  And beautiful, it’s really, really pretty up there.

We went to Urquhart castle on the banks of Loch Ness.  It is a ruin now having been blown up in the 1600’s to make sure that it could never be used.  The location is really, really pretty.  Our only regret was not having enough time to really explore it! 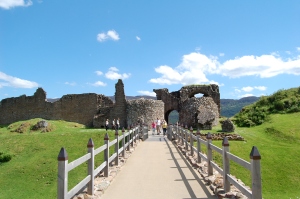 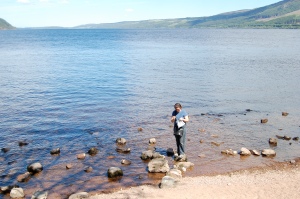 We then went by boat down the Loch a bit to meet-up with our tour bus.  It gave us a very different perspective on the beauty of the area.

From there we went to Inverness which is, for now, officially the furthest North that I have ever been.

Of course it has a castle as well, though they use theirs for a government office building now (must protect the office workers!).

Inverness was really the last stop of the trip as we took the motorway back down to Edinburgh in time for dinner.  On Sunday we went to the castle first thing.  We took a different route that we had ever taken so we got fairly close-up to the base of the rock that the castle stands on.

However, this meant a lot of steps…. 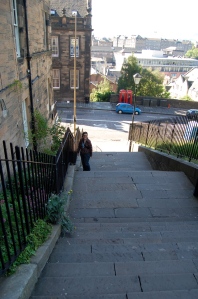 Edinburgh Castle is a very cool place to visit.

However, it is pretty difficult to take pictures as it is pretty crowded there.  The view though is wonderful from way up there!

After the castle we went to the Tartan Weaving Mills and Exhibition.  We don’t have any photos of this as it was, well. so very cheesy.  It was, however, very cool to see all the different kinds of tartan laying around waiting to be made into kilts or whatever you wanted to have your clan colors adorning.  Our next stop was the Scotch Whiskey Experience which we also have no pictures of as it is mostly a ride that you take that explains the process of making Scotch Whiskey.  It’s actually really informative and you get a Scotch tasting at the end of the process!  Very fun at 11 in the morning if I do say so myself.  They also have the largest collection of Scotch in the world on display there.  That was more or less it for Edinburgh.  We ran to a grocery store to get some haggis for a friend who is from Edinburgh and then collected our bags and made our way to the airport and then home.  It was a great trip and we had a lot of fun.  However, it is always good to be home too….

One thought on “More of Scotland”