When did I become a perfectionist?  I mean really, when?!  Last I remember I was changing colors in an afghan by (gasp!) knotting yarns together and the next thing you know I’m ripping out 90 or so rows of sock yarn which had been knit on size 2.5mm needles (for my crochet buddies, this is like steel hooks more or less).  I got to ripping and I decided to just start over.  Since I had started this sock prior to learning that I was twisting my stitches there was a weird tight spot on the top of the sock near the cuff that was annoying me so, I just ripped the whole damn thing out.  And started over.  I wound the yarn on the ball winder so that the yarn that I had already knit is in the center of the ball so hopefully the bits that I have already re-knit 4 times will be part of the “leftover” yarn that will go towards this project (for those of you still Ravelry-less [if you are a fiber artist what is wrong with you?] it is also this.).  I know, what it is with me and blankets of many, many, many colors right?  Anyway, here is the sock as it was:

Sock as it was

and here it is as it looks now: 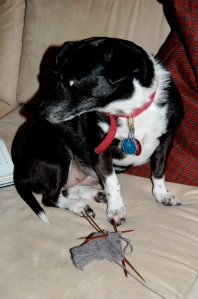 Meara can't believe that this is all the bigger it is by now!

Speaking of blankets of many, many, many colors I am nearly done with the gigantic granny square afghan throw.  I put 3 rows of half double crochet around the edges and am working in the ends and I will be done.  I think that I am going to pack it to go home with me in August and mail it from there as it will be a tad heavy to mail from the UK without taking out a loan of some sort.  Since I want my suitcases to be nice and fill-up-able this will be a perfect thing to take-up lots of space that isn’t coming back with me!

Granny Blanket with Jiji for scale

Over the weekend the hubby and I went to Milton Keynes for a few things.  One of the places that I stopped at was, of course, IKEA.  I got some fabric there for a project that I have in mind as well as several very small little pillows that I plan on making some fast pillowcases out of leftover fabrics for the trip.  I may get a 4th as they were so small and, well, cheap that it would be a good idea.  I also got a small throw blanket for the trip.  I know it seems odd to be getting things like this for a vacation but remember, we are going to be spending between 3 and 4 weeks on the road.  Having things that can make us more comfortable seems like a good plan to me right now:-) 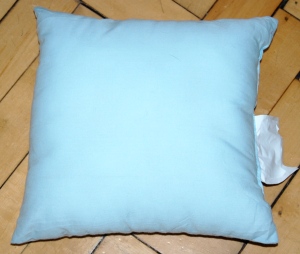 We also got a patio set for the courtyard.  We are planning on moving it into the conservatory when winter hits and getting rid of the turquoise turd to make space for it.  So, it had to be fairly small-ish but we also wanted to be able to actually entertain folks outside since we have such a lovely place to do it now.  Once again, IKEA came to the rescue with this: 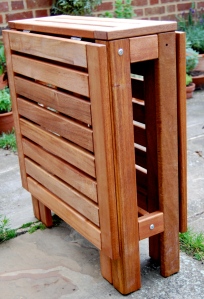 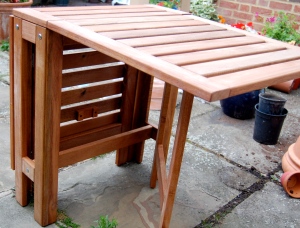 The table with one wing up 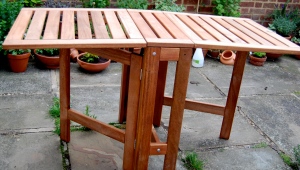 The table with both wings up

The table with one of the 4 chairs that we got as well. I didn't want to get them all out as it looked as though it was about to rain.

I also bought a new fig tree.  We had been looking for a 2nd one to plant in the other very large pot that we have in the courtyard that was not a ‘Brown Turkey’.  It seems that ‘Brown Turkey’ is the only kind that is easy to find in this country despite the abundant number of huge garden centers around.  Our first one is a ‘Brown Turkey’ so we just wanted something a little different.  When I went to Frost’s yesterday I came upon a variety that I have never heard of before called ‘Violette’.  So, today I planted it up and we’ll see how it does!

The new fig (note: I trimmed the very top of it as to make a cutting and to also encourage branching out)

I guess that this makes a nice segway into the, “oh how does her garden grow?” part of the blog (may name is Hortihoney for a reason!).  It hasn’t exactly been warm too much lately here.  We’ve had a few days that would have almost been described as “hot” by anyone who hadn’t lived in Florida, but that’s been it.  I’m so not complaining, I think that the cooler weather is just so much better than the brain-boiling, skin-baking, automatic sweat making heat that is Florida this time of the year.  However, it is going to make me have to rethink my outdoor growing strategies.  Obviously plants will need to be started indoors earlier in order to be nice and full by the time they are put outside.  To this end, I am already thinking about how to take cuttings and keep plants in the conservatory over the winter in order to not be held captive by what the garden centers have and when they have it.  I am also thinking about bringing in some cuttings of things so that I can make plants for the various plant sales that go on in May and Early June.  To no-one’s surprise, I will probably have Streptocarpus and violets ready by then but perhaps some herbs as well?  I have to think about all of this now as I will probably be gone when the first frosts occur here. 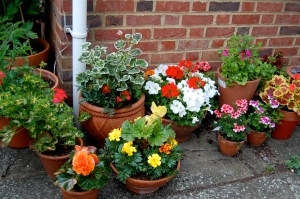 Part of the herb garden

More of the herb garden

I also decided to try to make a higher humidity rooting chamber of sorts. 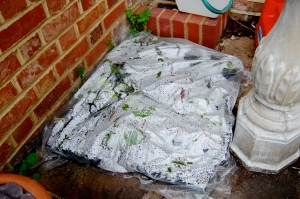 Really that just means a bunch of pots under a piece of opaque plastic.  Cheap, fast and effective though none too pretty.

So, to leave you with some pretty pictures, here are my hanging baskets with their solar powered roto-turner things (which, by the way, need a lot of sun to function, at least initially, in order to turn the pots).