So, I cannot tell you hour by hour what I did today.  However, I will tell you that it was a cultural experience on par with visiting Morocco.  Ok, I just want to start off by saying that I officially have a crush on the village of Barrow and would love to try to live there for a year or two.  Yes, you read that right, I would love to live in Barrow, Alaska the most northern incorporated town in the United States.  The sense of community there is absolutely amazing.  The pride that the folks take in even their municipal systems is pretty amazing, as well it should be.  Living in a permafrosted, isolated place like that causes a lot of innovation in the ways that everyday things are done, like a sewer system or electricity.  Or just how they even get stuff to them.  Everything is either brought in by plane 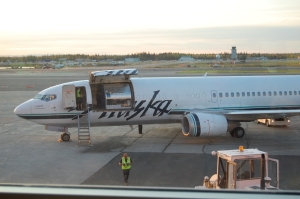 or shipped up on one large barge that arrives in June.  All building materials, cars, gasoline everything is brought up on the barges (there is one for stuff and one for gas and diesel).  They endure 65 continuous days without seeing the sun each year and even at the height of summer the temperature hovers in the 40’s.
So, I left Fairbanks on an Alaskan Air flight at about 7:30am.  The views out the gate areas were amazing of the mountains in the distance.  The flight left early and arrived in Prudoe Bay early.  There we took on quite a few more people and the testosterone level in the plane skyrocketed.  It was all guys that had had jobs working in the oilfields and on the pipeline.  All but the high-up engineers had a little bit of a scruffy look about them, like they were a couple of weeks overdue for a haircut.  Admittedly, some of the guys looked like they were a couple of years overdue for their trim.  Anyway, talking to one of the guys I found out that a lot of them were nice Midwestern boys working up there for the summer to earn enough money for the rest of the year.

The plane ride from Prudoe bay to Barrow was just a quick 45 minute jump and we were dumped out into the smallest airport that I have ever seen a 737 land at.

One of the ground crew that escorted us on the ground into the building was wearing a native style, fur lined parka, which each woman makes in an individual style, with the fluorescent safety vest over it.
We got into the tour bus which is a school bus not much converted.  In fact, I feel as though it could be the same exact bus that I rode to school in 20 years ago!  Anyway, our tour guide Ryan started showing us the town.  Ryan is a native to Barrow and was a wonderful tour guide.  He started off wearing jeans and a t-shirt and, get this, sandals!  We went too and fro throughout the town, he showed us sights such as the Will Rogers monument,

The Will Rogers Monument

all  the schools and churches in town, the fire department and in general, the whole town.  Some of the coolest things that we saw:
The remains of sod houses from the Inupiat Eskimo forefathers.

The white things sticking up out of the ground are whale bones that were used to support the sod houses. These ruins are quite old, estimated to come from between 500 and 900 AD.

A high school football game on their new football field.

The football field is made entirely of astroturf and it is probably 20 yards from the Arctic Sea. When the Barrow Whalers win a game the entire team take a dip in the water! 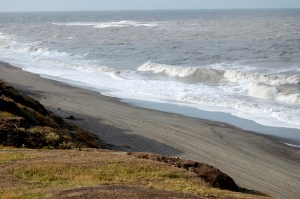 The Arctic Ocean in all it's glory.

And not one but two Snowy Owls on the tundra. 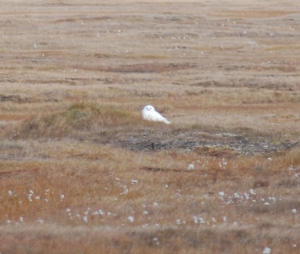 This one was out near Freshwater Lake, which is out towards the airport.

And this ballsy one was right across from the pizza place in the archaeological site with the sod house mounds.

Going to Barrow is by far one of the coolest things that I have done yet travel wise and I so want to go back!

A mountain range that we flew over on the way to Prudoe Bay.

This is what permafrost tundra looks like from the sky.

This is the beginning of the Trans Alaskan Pipeline near Prudoe Bay.

One of the skin boats that the natives still use for hunting whales. Seriously.

This is Ryan, our tour guide, taking a dip in the Arctic Ocean.

We had the honor of watching the Olympic Torch being run through Barrow. It was totally a coincidence but a very cool one. I loved the dog running along with him!

This is me out at Point Barrow, well, as close to the point as I could get without a 4-wheeler!

The is a whale skull with the top of the BOMB that they use to kill them still sticking out. Believe it or not, this is the humane way to kill a whale!

Here I am in the famous photo-op site.

The reason that I thought that the 2nd owl was ballsy was that it was sitting a few yards away from this sign which reads, "Welcome to the ancient village of Ukpaigvik 'The place where we hunt snowy owls'".

Barrow from the sky.

A glimpse of the Arctic meeting the tundra 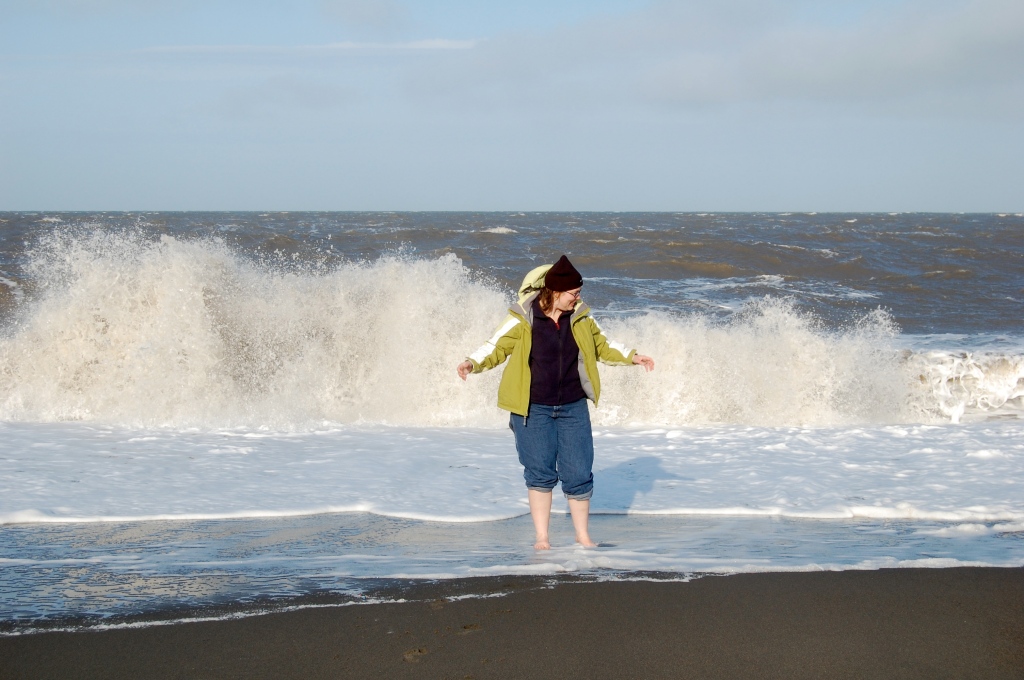 My personal favorite. I am IN the Arctic Ocean!

Travel knitting:  A few rows on the lace stole on the flight.

The boys haven’t yet figured out 🍎. The ladies are too, they just aren’t as good motivated so it’s more difficult to get a good photo.
Like nearly all boys these guys get a lot less shy when they are hungry 😋
The new rams are taking their first snow in stride.
First snow of the season.
Went to Blarney Castle today. It was an experience.
My Tweets