This past weekend I once again ventured North.  On Thursday I left the Chapel in the morning and headed towards the Yorkshire Dales once again.  I wanted to visit a few places that I hadn’t been able to see the last couple of times that I had been in that neighborhood.  The drive up isn’t too hard, it’s mostly M1 or A1 then a bit on the A684.

First I went to the Wensleydale Longwool Sheepshop just outside of Leyburn.  The road to the shop is well-marked from the main road and I had no trouble finding it.  It’s down a long, single-lane road that was nearly coated in pheasants out catching a few rays of sunshine.  I didn’t take any photos of the shop as the light failed as soon as I got there, but it does look much as it appears on their website.  The Wensleydale yarns end-up with a lovely sheen, much like the sheep themselves.  I did see a few of the sheep in a field, but it was too difficult to get the car stopped in a safe way in order to photograph them. 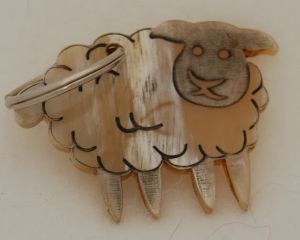 A horn key chain that I picked up.

I then went on to Hawes, which I had stopped at with Barbro and Malin on the way to Scotland.  I had kicked myself that I hadn’t gotten a little shallow pot or mug from the potter across the street from the ropemaker’s workshop as they had lovely rams on them.  So, I got a little shallow pot to put odds and ends into as well as stopping in at the ropemaker’s and getting a small present for the neighbors helping to keep an eye on Mal at home.

The rams head is the symbol for the area.

I then headed East towards Newcastle and Sunderland.  I reached Sunderland easily enough and found the cafe where I was going to be meeting my friend Veronica as well as the lovely Suzanne from Knit Camp.  The knitting group was quite friendly and the cafe that it was held in served quite tasty and reasonably priced food.

After the knitting group, Veronica rode with me back to her home in Northumberland.  It’s a fair trek, but it was an easy drive since there was no-one else about at that point.  I was introduced to her kitty and given the grand tour.  She lives in a pretty old village, though in a practically brand-new house.  On my bed, there was a little pile of treats.

The next day I got-up with V and drove into the suburbs of Newcastle.  She got me sorted for the Metro and she went off to work and I went off exploring.  First up was the Bill Quay Community Farm.  It is a city farm plopped between the river and quite a lot of houses.  I didn’t have any trouble finding it and had a good wander around.  They didn’t have a lot of different breeds of sheep there, some Jacobs and Hebridean but the whole farm was charming with lots of sculpture and imaginative reusing of materials.

This Jacob Ram just wanted to get his picture taken...

and why not? Totally photogenic! 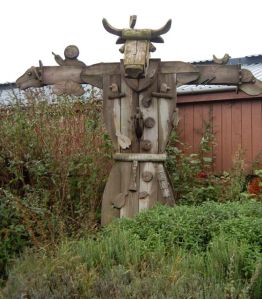 Does this statue remind anyone else of Season 2 of True Blood? 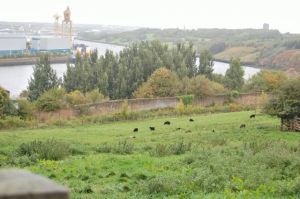 I then went into the city proper where I hunted down The Knit Studio in the centre of Newcastle.  Anyone traveling to Newcastle really should hunt down this shop if, for nothing else, to know what knitting stores can be in this country.  Anne Makepeace, the owner of the store, has found an amazing space in the 13th century Blackfriars Priory building.  Since it is on the 2nd floor (1st to folks in the UK) it has high ceilings and nice tall windows and plenty of space! There are 2 comfortable couches as well as a large table to sit at and tons of beautiful antique display cabinets full of yarns, notions, kits and books.

(I do have photos of the shop, I just can’t get them off my phone right now.  Gotta love technology!) 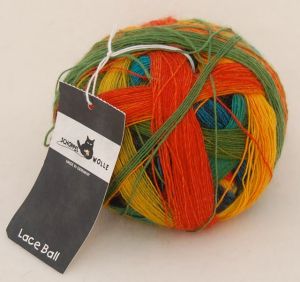 Rainbow colored lace? How could I resist?!

After hanging out a bit there and having lunch in Newcastle’s Chinatown, I wandered back to my Metro stop.  There I went to Fenwick’s, which is a department store chain in the Northern part of the country.  It is really a lovely store, reminding me greatly of Marshall Fields before it was bought by Macy’s.  It has a nice little haberdashery department, though the yarn selection was really lacking.  However, it did have a fun food hall where they did sell assorted American foods and candies.  I then took the Metro back to the area where V is working currently.  I have to say, the Metro was quite nice to deal with.  It was clean, not too crowded (unlike London) and was very much on time.  Highly suggest using it.  Anyway, we drove back out into the wilds (it does, in fact, feel very much like you are driving off into a very wild place in this neck of the woods!) where I finally got to meet Veronica’s partner and we all went off to a neighboring village to compete in a village hall quiz.  We were doing quite well as a team, at one point we were even in first place, until we got to the Northumberland questions.  Sigh.  I got out my knitting….  However, it was a fun evening and I was quite excited by the geography section of the quiz as it had US states on it!!!  Of course I got them all correct:-)  (My Grandmother would turn in her grave if I hadn’t!!!!)

Saturday we got up fairly early and took off North.  We were headed towards St. Abbs in Scotland, home of the lovely Woolfish.  I’ve met lovely Louise at a number of yarny events, most recently the iKnit weekender.  She always has lovely stuff for sale and I was excited to go to her knitting group, which is held in her HUGE conservatory of her house.  The ladies there were lovely and the scones were to die for!!!  We then walked down the hill to the shop and had a good nose around, buying a few things. One of the things that I thought was most interesting was how they displayed this huge amount of yarn… in the fireplace.  Their shop is in the old smithy’s and thus there is a huge fireplace full of a wool and silk chunky yarn!  It’s great!  Once again, would totally suggest stopping by the shop if you are in the area. 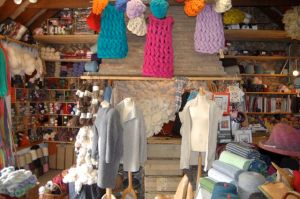 Seriously, it goes WAY up!

Totally makes me look at the warming possibilities of a fireplace in a new light! 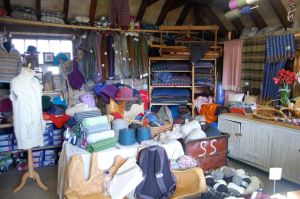 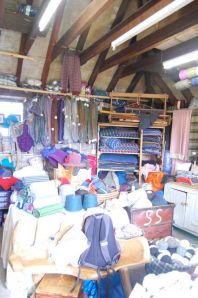 I got a few skeins of that luscious bulky chimney yarn as well as a few tiny little balls of sock yarn.

We then took a turn down to the village of St Abbs, which is charming.  It’s an old fishing village and the North Sea is very much in play.. 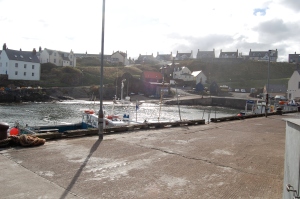 After nearly getting soaked we got back in the car and headed South again, ending up in Alnwick.  Alnwick is a charming village with a fair number of businesses and, quite possibly, the largest used bookstore that I have ever been in.  It’s called Barter Books and it takes up the majority of a largish train station.  It has a huge non-fiction section, though it’s craft books were thin on the ground.  However, because of its size, it was open and easy to navigate, none of the claustrophobic rat-packiness that you quite often find in used book stores.  Once again, would strongly suggest checking it out if you are in the area.

Our way home got a tad interesting when I missed a turn, and the GPS didn’t mind.. 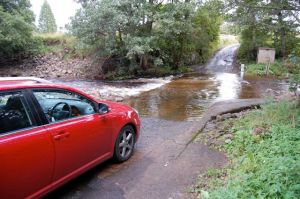 We saw this handsome man and wondered about his halter.  Is this for marking the ewes that he has bred? 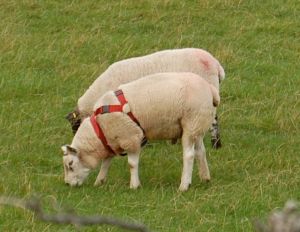 The next day was the Masham Sheep Fair.  V’s local spinning guild had a coach that was going for the day which we met in a nearby village.  All of the people on it were quite nice and it was relaxing to get to actually ride through the Yorkshire Dales for once, rather than driving!  We arrived in Masham around midday and we immediately jumped into the fray.  The first port of call was the fleece sale.  Both V and I looked over the fleece and walked away empty-handed.  The selection looked throughly picked-over and though there were a few interesting breeds left represented, they were in such a condition that we passed on them.

We then went over to watch the sheep show, which was amusing and educational at the same time.  Anytime that you get to see sheep dancing…..

After the dancing sheep we went and visited the craft stalls and judging area.  This was held in the Masham Town Hall and thus had nice bathrooms.  I got a few things here including some Swaledale aran-weight yarn and some Falkland tops.

Sorry about the photo, I tried to get a little bit out of the middle and had a yarn prolapse! 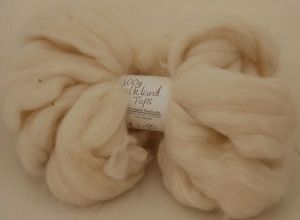 Then it was time for the sheep! 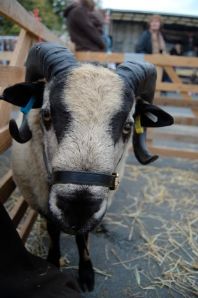 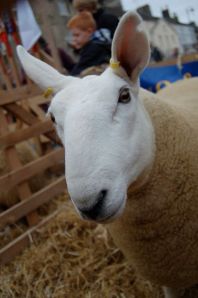 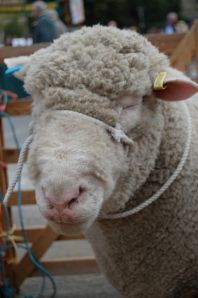 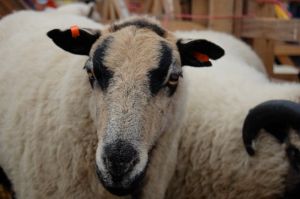 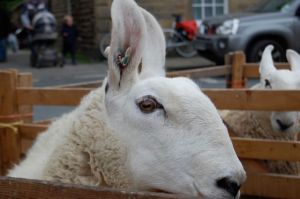 There were children showing sheep (which is always cute!) 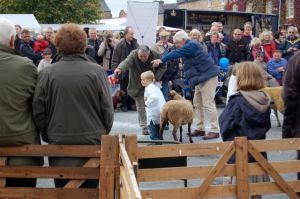 There were children in a parade wearing a sheep, or to be more precise, a golden fleece.

In general, there were sheep everywhere!  I then got a few sheepy items at various stalls that were raising money for various good things… 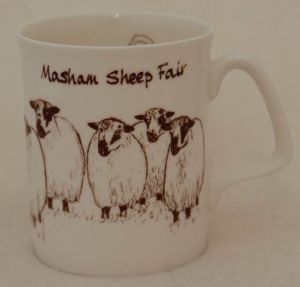 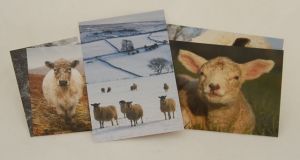 Some sheepy (and cow-y) postcards.

And I stopped in at the guild stands as well and got this batch of Cheviot roving. 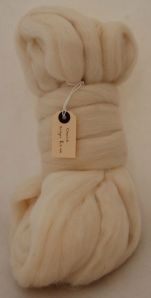 There weren’t just sheep at the Fair, there were also dancers!  Some of them with flowers on their heads!

Morris Dancers getting down.

Back at V’s house, we set to sorting her fleeces out on her deck.  She has the ability to find fleeces far and wide thus had quite a backlog of fleeces awaiting skirting, sorting and logging into her fleece logs.  By bedtime we were both smelling even more sheepy, but had gotten a fair number of fleeces squared away.

It was a great weekend and I saw a lot.  I’m slowly getting it through my head that this is a small country thus their animal shows are small as well.  The atmosphere of the Fair felt a lot like the county fair back home, only smaller and, well, more British:-)  If you are up in that area of the country when the fair is going on, I would strongly suggest taking a day and checking it out.