Since I am pretty sure that she doesn’t read this (at least not in anything close to real-time) due to having an extremely active toddler in the house, I feel that I can post pictures of these without any major repercussions.  It might even be a good thing given how the UK and US postal services have done me this season*.  I will put pictures of her presents up and then I can point to it when she never gets it and say, “this is what you were going to be getting!”  Anyway, this is a long-winded way of saying that I have finished another pair of socks!  Yea!  Considering that the first pair took me nearly a year to complete, this is moving along quite a lot faster with only about a week for this pair!  They would have been done faster, but I kept having gauge issues for some reason on the second sock.  It kept ending-up significantly smaller than the first one.  Perhaps I was more stressed?  Anyway, here they are (and don’t worry Sarah [if you are in fact reading this], I washed them after modeling them!). 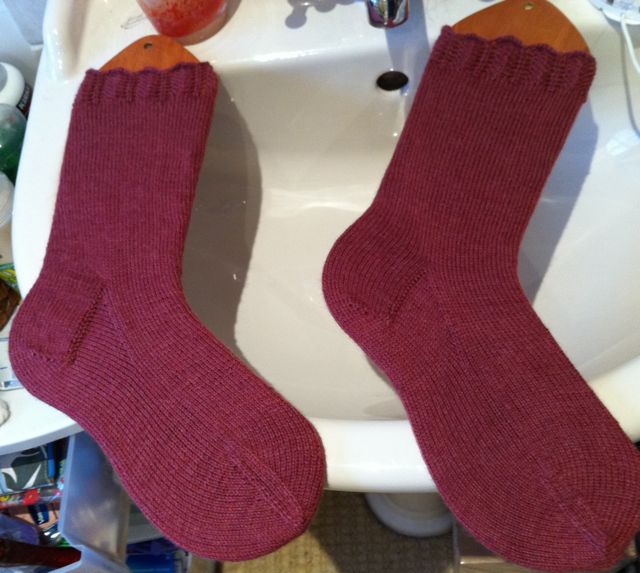 See! Proof that I washed them!

Pattern: Sock Recipie: A Good, Plain Sock by Stephanie Pearl-McPhee except for the cuff which is the Prestige Cuff from SWTC Socks a la Carte.

Since finishing the socks I decided to plug away on my sock yarn blanket for a bit.  No photos as it is only a little larger than it was the last time I photographed it, but it is still taking up some time.

Part of the reason that I am sooooo exciting of late is the dogsitting that I am doing.  It makes it rather difficult to just hop in the car and go somewhere more involved than going to Tesco for groceries.  There are feeding schedules and all sorts of stuff to deal with, not to mention a lovelorn Malcolm whining a LOT because Kali won’t… well, I’m not sure what exactly he wants her to do (they are both responsible pets if-you-know-what-I-mean) but she doesn’t do it while in the house.  Because there are new animals in the house there has been jealousy pees and lots of barking whenever anything happens.  It’s been exasperating to say the least because all of these animals have known each other for years!!!

There you have it, a brief look into the über boring life of mine.

*I mailed seven packages to the US (various parts) on the 20th of December.  I knew that they weren’t going to get there by Christmas, so I used the post type that the postmistress said could take up to 2 weeks to get there.  They are still not there, not a single one of them has been delivered as of today.  {Note to self: Try slightly faster shipping method next time so that they will get gifts in same season at least.}