I have several thank you’s that I need to make for people who have donated sock yarn leftovers to the massive undertaking that is my sock yarn blanket.

First off there is Tini, who sent me a great package with some sock yarn, beads and some candy.  Always a good combo!

Then I also got a package from an Anonymous RAK’er.  See, I belong to a group on Ravelry that is called RAK in Europe (RAK stands for Random Act of Kindness, just for those who didn’t know!) and the idea is to post a list of things that you are wishing for.  They can be physical (in my case sock yarn remnants) or more good feeling (well wishes for something going on in the person’s life).  So, you look over the list and see if there is anything that you can help with and if there is you send off whatever it is that you can help with.  There are no “paybacks”, there is no “requirement” to do anything, it’s just a nice thing to do to help someone out.  Anyway, I joined this group this past month and have had a lot of fun in it so far.  I’ve sent off 3 RAK packages which made me feel really good, and I’ve received 2 (I’m counting Tini’s as one as she is the one that suggested that I join this group!).  This package from the Anonymous RAK’er was completely unexpected, so all the nicer! 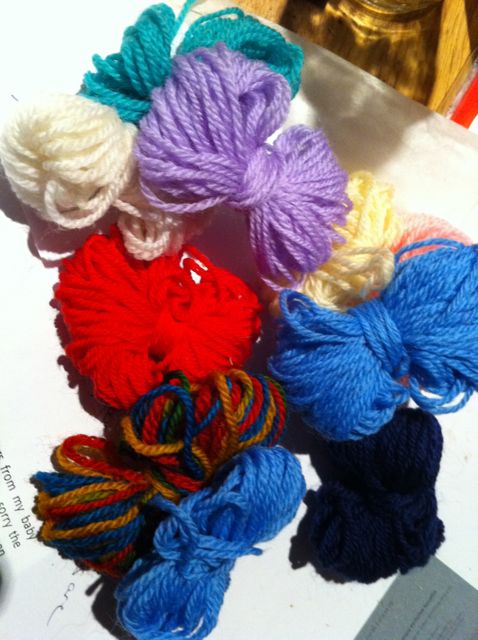 Now my last thank you is a super-duper-humongous-ginormous-holy-shit-look-at-the-size-of-that-thing one.  Jon from Easyknits said that when I came to his house to help out he would give me some of his tangled skeins and unsold yarns and such from up in the attic.  He said that is was, “a lot”.  I threw a couple of tote bags into my backpack when I was getting ready to go into the city on Wednesday, then I threw in more in “just in case”.  I also had a good-sized shopping bag with Jon’s birthday cake in it (his birthday is shortly before Christmas, but there was snow insanity and plague going on then, so he got it about a month late).  Anyway, Jon filled-up all of the totes, the backpack plus a big blue bag from IKEA!!!!  We were up in his attic and he just kept throwing yarn and fiber at me!!!  It was like a really good dream except that Jon was Jon and not a scantily clad Viggo Mortensen (not that Jon isn’t handsome!!!) (I think that you may have glimpsed a little too far into my head with that dream description!).

I was such a quivering mess of yarn-y-ness that I didn’t take any photos of it all until I had gotten home and unpacked it all.  But you can imagine how interesting it was sherpa-ing all those bags home on trains and tubes was!  Luckily, it was well after rush hour so I didn’t have a million people pushing at me to go faster and the route that Jon’s husband Roy came up with for me to get to Euston station had minimal steps to hike up and down.  I just got a lot of interested looks, not scowls.  Anyway, here is most of it, though I realize that there was also a bag of ends of cones that I didn’t get in this picture!

That big pile in the back? That is all sock yarn.

Some of this is going to be RAK’ed and a bit is going to Finland with me in February, so don’t think that I’m a total greedy pants (well, ok, I am, but I do share!!!)

There was also a ton of Kool-Aid packets that he gave me to play with the undyed yarn with, which I did yesterday for the first time.  Since I was just playing, I wasn’t too worried about how things turned out.  It was a lot of fun (though I needed to add less water to the Kool-Aid dye that I was using to make designs.  Live and learn!) and I managed not to make a complete mess of the kitchen.

Now for all of this yarn-y love, I did do a little bit to help.  Let me tell you sock club members, you are going to love this months colorway and pattern (which I helped to label, so I am very familiar with it!).  It’s perfect for curling-up in front of a fire and knitting during the cold and dark of winter.  Jon is also going to be at Unravel if you want to check out his yarn up close and  in person (as will I hopefully!).