My honey brought home something from The Netherlands a few months ago which he thought that I was going to totally dig.  He presented it with a flourish to which I gave him a very odd look.  It was a box of chocolate sprinkles.  A rather large box, true, but just a box of sprinkles.  He then informed me with the excited air of a child sharing a discovery that the Dutch eat them on bread or toast. At this I guffawed thinking that the guys at the office he was working at there were having a go at him.  Then he pointed out the box:

There is a picture of a piece of bread with sprinkles emblazoned across the box.  Still, I’m resistant to putting sprinkles on a (in my mind) a non-sprinkle bearing food.  He wheedles and cajoles until finally I cave and tell him to give me the damn sprinkles on bread.  My husband, saintly man that he is, toasts it first. 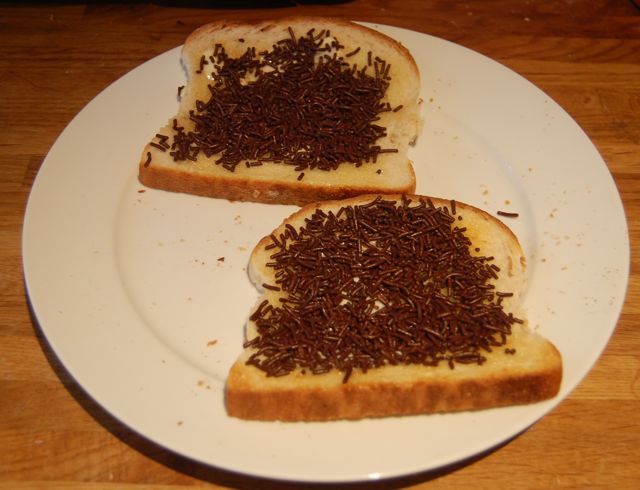 It was love at first bite.

Now those of you out there that are not Dutch (and probably more than a few of the more Gourmet Dutch as well) are probably cringing at the idea of putting sprinkles on toast.  I know that I did when suggested to me.  But trust me, it’s not bad.  In fact, it’s pretty damn good!  However, he did bring home a very small box of “fruity” sprinkles which were, ummm, not quite as palatable as the dark chocolate…

Today’s interesting food experience was brought to you by international travel for work and my risk-taking hubby!