The time for me to leave England is drawing near.  This September I am moving back to Iowa where I grew-up to be closer to my family and to get to live in the Midwest of the US again.  I have wanted to move back for at least the last 10 years, just couldn’t do it for one reason or another.  The time has come where I don’t really feel like I can put off this move any longer for a variety of reasons.  I will be moving back to the States alone as my husband is staying here along with Jiji the cat.  I will be taking the other 6 members of the family home with me.

This move is a major reason for the silence of this blog for a while.  It was hard to write anything without mentioning it in one form or another as it has been influencing what I’ve been doing for the past couple of months.  I’ve spent a lot of time researching and generally getting things ready for this.  There is a lot to do, including scrubbing an absolute TON of clay pots and giving away the plants that resided in them as well as buying all the needed crates for pet movement (Mal’s is HUGE) and checking on the various rules and requirements.  In some ways the trip back to the US is easier.  The pets need a lot less paperwork.  However, it is more expensive, something a tad more than double.  The reason is that on the way here the numbers that we were dealing with were all in US dollars, on the way back they are all in GBP.  Really, the numbers aren’t all that different, just the value of the currency.  Well, that and I didn’t have an absolute skyscraper of a dog when we moved here!

Here is a picture of Malcolm’s travel crate taken apart and nested with the back-end of our full-sized car for comparison: 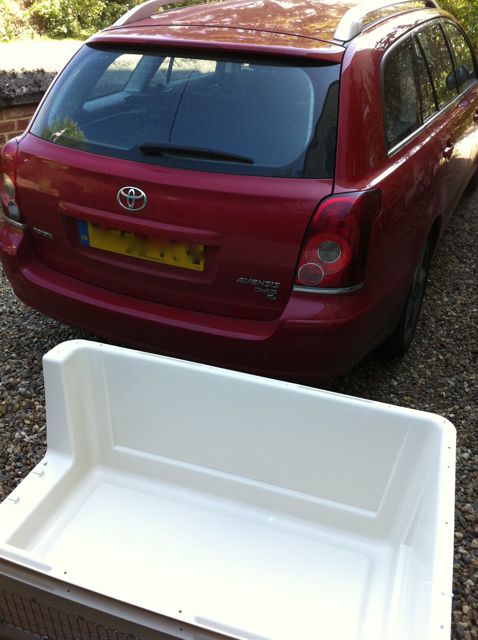 I think that it is better to travel as a pet nowadays than as a person.  I mean, the pets have to have 2″ above the height of their natural standing position as well as being able to turn around and lay down comfortably.  Yeah, next time I’m booking myself as dog:-)  Malcolm isn’t really all that big, just tall.  I had to get the biggest pet crate that they make for him because of those long, long legs of his, no other reason.

So, in the next two weeks I will more or less be fueled by Dr Pepper Zero.  Since I have done this all before (an international move) I have a pretty good idea of what needs to happen and when.  There are a few new issues though on this route.  To go into the US all of my stuff needs to be packed by a professional moving company, not me.  The US government trusts a bunch of ill-paid foreigners as to what is in my container over me, their citizen.  To say that this is annoying would be an understatement.  I packed everything on the way here and made it with only 2 items broken.  One was a piece of furniture that was shoved into the container a little harder than it should have been and the other was a clay pot that was tossed in at the very end of the loading when we realized that we had loads of space still and it wasn’t secured at all.  All the dishes and breakables made it through unscathed.  I actually pity the poor guys that they send out here to pack my belongings as I will likely ride them like ponies about packing my breakables:-)

I will, of course, try to post some updates as the move is forthcoming.  The way that this is looking like it is going to shake out is that the household items will be packed and shipped early next week.  The pets and I will travel early the week after to Chicago.  I’m attempting to do the opposite of what I did moving here, meaning that I would like to be back in Iowa for a long as possible before my container arrives.

One of the things on my (in my opinion) very long to-do list is to pack my suitcase for what I am going to be wearing for the next 7-8 weeks.  In Iowa.  That could put me out as far as mid November!  I could have Indian Summer weather (highs up into the mid 80’s) down to full-on winter weather with sub-zero temperatures.  I just keep telling myself that clothes are a lot cheaper in the US and if I have to I could buy a few things to tide me over if I need to.  Already I am wearing most of my heaviest clothes (long wool coat, heavy wool sweater, hiking shoes) onto the plane with me to avoid packing them.  I am going to be a mess by the time I get to Chicago!  Of course, I will take a lot of the clothes off as soon as I get on the plane, but still, I am going to be a sweaty beast by the time I get to my economy seat!