I finished the pink and grey monkeys shortly after I finished the last post.  My sock blockers have been getting a lot of work lately, a lot more than they are used to at least!

There wasn’t a huge amount of yarn left over, but it only take about 5 or 6 grams to make one of the smaller squares.

I enjoyed making that pattern so much, I’ve decided to make it again.  I’m even using the same yarn (base, like I would have that much pink of any yarn in my stash!). I think that these are going to be for me as I wear a lot of the colors in them often. 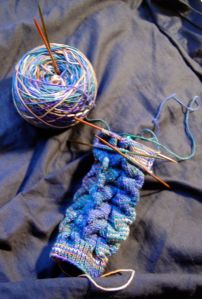 It was a grey and rainy day today, as it has been much of the spring. Hence the craptastical photos. So far, Ames hasn’t flooded in any substantial manner, though given the amounts of rain that we have received, this is almost a surprise.  I don’t live in an area prone to flooding though there are areas like that all around the city.  Hopefully, this won’t be a repeat of years past…

(Don’t worry, the Wollmeise is all in plastic bags and on a top shelf, just in case! [because I knew that y’all were worried!])