So, yeah…  I get the addictive nature of the Monkey socks now.  I already want to cast-on the next pair and I’m not done with this pair yet!  It’s sort of like when I was still smoking (yes, I used to smoke. I quit. It’s bad for you, don’t start it!) when I would want another cigarette before I had even finished the one I was smoking. Knitting Monkeys is kinda like that… 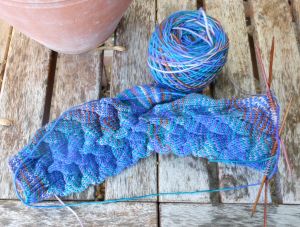 I even have the yarn for the next two pairs balled up at this point, just waiting to get cast-on. 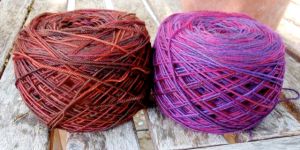 Both are Socks that Rock lightweight in mill ends colors (aka, I don’t know the colors:-))

It really is a sickness. Get used to seeing Monkey’s on here for a while!

In other news, I now have a place to live come the end of July.  Yay! I’m not going to be homeless!  Also, it allows dogs (note on the plural there) so I will be able to have both Weezy and Malcolm living with me next year.  I have a feeling that this means that the bromance ongoing between my father and Malcolm will cool a little bit and hopefully I’ll be able to get Mal back down to his proper weight.  Maybe in working on doing so, I will bring me back to down to my proper weight as well!

This has been a really scary year so far weather-wise across a huge chunk of the US.  For the folks in Oklahoma, it’s been heartbreaking.  It feels as though every time we turn around, there’s another round of severe weather heading their way, making the clean-up from what they’ve already gotten even more difficult.  There’s a really great knitting pattern book that’s been put together to aid the folks devastated by the tornadoes in Oklahoma.  It’s called k*tog and it contains 20 patterns including: 4 patterns for socks, 4 patterns for scarves or cowls, a vest, a cardigan, 2 hats, 4 shawls, a baby cocoon, some toys and a pair of fingerless mitts.  It’s $20 and ALL of the proceeds from it go to the folks in Oklahoma.  Honestly folks, even if you only knit a couple of the patterns in it it’s still a great deal. I mean, $20 for 20 patterns. Go, get it here if you haven’t already!

This weekend is the Iowa Sheep and Wool festival in Adel, Iowa.  I will be attending and taking a class on Saturday morning about Angora rabbits. How to care for them and how to spin their wool. Should be… fluffy:-)  I will be doing some stuff with my guild as well which is always fun!  If you are in the area I would strongly encourage you to come and check out the wooliness!

One thought on “On Becoming a Knitting Cliché”

Isn’t that the whole point of a bathroom??
The boys haven’t yet figured out 🍎. The ladies are too, they just aren’t as good motivated so it’s more difficult to get a good photo.
Like nearly all boys these guys get a lot less shy when they are hungry 😋
The new rams are taking their first snow in stride.
First snow of the season.
My Tweets