The wonderful Christmas season is in full swing once again.  I mailed off two Christmas packages at the post office this morning, which made for the house becoming slightly more navigable once again (they were some big ass boxes!).  I had to go out today to return a few things and to pick up a very important piece of equipment in this house.  No, not a kitty litter scoop (nothing is THAT important!) but a wireless router.  Last night between 9 and 11 the power went out at least a half a dozen times.  I don’t know what was going on exactly, but Progress Energy trucks were patrolling the street like we were a third world nation currently under martial law.  Anyway, I think that this caused the final demise of our 5 year old router with an attitude.  It wouldn’t even flash a light this morning.  A dead router is a sad little thing.  Without the little lights that blink at you it is just a little plastic box with an antenna.  RIP little router, you were a pain in the ass at times, but you served us faithfully for many years…

However, we now have a router with the words XTREME N GIGABIT ROUTER blazoned across the front of the box.  I don’t know what exactly that means but is sure sounds geeky-sexy (and lord knows I am all about the geeky-sexy!).  It was however, extremely easy to set-up, so it must not be that geeky or else I would have had to have an intimate understanding of the logarithms that went into the programing of the device in order to make it work.

I have also finished another scrapghan.  I am not going to post a picture of the final, lovely product as it is a Christmas present and the recipient reads this blog.  But I will show you a small part of it.  Since these are all unique works of art, I have decided that they should be a numbered series.  So, this is number 4, which I slip-stitched onto it with a wool yarn so that it felted on when I washed and dried it. 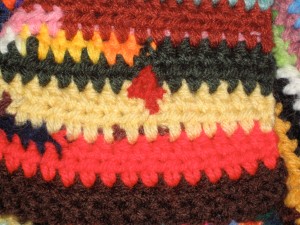 I will also show you a picture of this particular blanket with some extremely cute animals on it.

Is is any wonder that I can never get any work done around here with this level of cuteness going on?