So, I am back to washing wool.  I still have a long way to go, but have gotten through most of one box that has vexed my husband by sitting in the kitchen for a few months now.  I have found that (gasp!) smaller batches actually make the whole overall process go more quickly.  Go figure.  So I am working on washing da wool once again.  You may ask (and with good reason), “Why now, in the middle of a move?”  Well, for starters, I don’t want to take dirty wool to the UK.  I am not sure what their rules are on that but, quite honestly, at this point I really don’t want to find out!  I am afraid that I would have to fill out a permit for it and that is not going to happen! Secondly, I don’t really want to pack dirty wool period.  It smells.  I enjoy the scent of shorn fleeces but I am not going to subject the rest of my family’s possessions to be scented like that.  I think that my husband will thank me both in the short run (the box is out of the kitchen dear!) and in the long run.  And lastly, I think that I am getting hyped-up over the thought of going to Maryland Sheep and Wool (I booked my car today on Priceline!!!)

Last night was Yarn Therapy at Infusion Tea.  I really like that this group was named in such a way as to not make crocheters feel like red-headed stepchildren. (Man, with all of the mixed marriages out there, I’m sure that there are a lot of read-headed stepchildren out there.  Where did that saying come from?  Does anybody know?)  However, last night is was just Terri (the founder of the group) and I.  No ICAN, but there was a book club (but none of them were breastfeeding during the course of the night….) and it was in general a pretty busy night for a tea joint.  Since Terri was the only one to show-up besides myself, she got the whole load of violets that I seem to take everywhere with me nowadays.  It was still a very fun night even with just the two of us though I didn’t seem to get much done on the super-fucking-secret blanket.  It is the never ending storyline.  (I think that you need to be around my age to get that joke….)

I took some pictures of the office.  It is now offically “full” meaning that no more boxes are going into it.  You can imagine that this makes it a little hard to photograph.  First I tried to take a picture of the wall of boxes with very little space to take it (basically a walkway area).

So then I tried to take a picture of the top of the solid mass of boxes that is the office.  It didn’t go so great….

To give you some perspective, there is a little less than a foot from the top of the white thing and the ceiling. 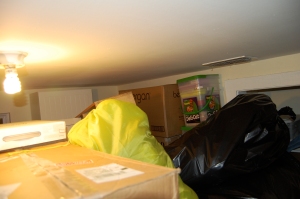 However, my yarn room is the most organized that I’ve ever had it.

Maybe not for long with the Milo cat in it!

I have talked to folks who know me about Belle and Willma, my twin sister cats.  I’m sure that a lot of folks have thought something along the lines of, “Uh-huh, a lot of cats look similar….”  Well, here is a very rare picture of the sisters together in one picture. 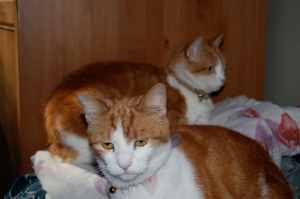 I am, so far, seriously enjoying the Never Not Knitting Page-a-Day calender by Stephanie Pearl-McPhee.  It is like getting a little hit of her blog only first thing in the morning (or whenever I fracking wake up!) and so far it has been really fun.  I’m also diggin the fact that my daily Get Fuzzy calender is now in color!  Has my life really contracted to this???