So, since it seems that my proper Shetland posts are going to take a dogs-life to be written (we crammed a lot into a week!) I figure that I can give you some swag shots to keep y’all happy:-)

Now, as you all know, the whole trip was arranged by Jamieson and Smith, the Shetland Wool Brokers.  So it only makes sense that I got a lot of J&S wool!

This is 3.5 Shetland fleeces from Oliver’s Special Stash for handspinners.  I’ve not taken them out yet as I don’t really have a good place to put them where the Malcolm dog won’t try to eat them.  I would like to take them out of the plastic bags photograph them and store them in a pillowcase or a cloth bag of some sort, but I am rather short of bags at the moment.  So they will stay in the plastic for the moment…

I also got some processed wool from them.  This is 500 grams of Grey Shetland tops.

And I got two of these 500 gram balls of white Shetland Superfine from them as well.  It’s really dreamy to work with…

I also got a skeins/balls of yarn (ahem!).

Firstly, I got enough yardage of J&S 2 Ply Jumper Weight in shade 81 to make Jared Flood’s Girasole Blanket, which I had gotten a signed copy of the pattern at Knit Camp.

I also got an arse load of the J&S 2 Ply Lace yarn, which I am a big fan of.  I got enough in the white to be able to do a fairly large shawl in it and a much smaller amount in the denim blue for a lace scarf.

Sorry about the seriously crappy photo.  It looks like those pictures that people post on ebay that have been done with a scanner.  However, one of the absolutely great things about the ladies at J&S is that they package your yarns and fibers like the apocalypse is coming and they want the yarn to survive it! Thus, it is packaged so well that there is really no good reason to take it out.  Except that it doesn’t photograph well:-)

Anyway, I also got a fair amount of their 1 Ply Cobweb lace yarn.  This I got in Optic, which is a tad lighter than the natural colorway.

I also gave into the siren song of the Aran yarns, buying this cone in a lovely shade of green.  Trust me, the color is much prettier than the photograph!

I also couldn’t resist a cone of the new J&S Shetland Supreme Laceweight.  I got the 2 Ply in Black.

One of the things that greeted us when we got to the hotel on Shetland was lovely goody bags from J&S and Liz Lovick.  Inside was a shade card from J&S (and I bought the other one later from Jamieson’s [though that was the only thing that I got from them!]).

Also in this goody bag was a lovely shawl pin/bookmark from Liz.

The charms on it could all be removed to be used at stitch markers.  Definitely designed by a knitter!

Our hotel was right across the street from The Spiders Web which sells hand and frame knitted items from on the island.  I got a few things there, mostly as gifts for people at home.  However, I did get one thing there for me, a hand-bound blank-book covered in Fair Isle knitting. 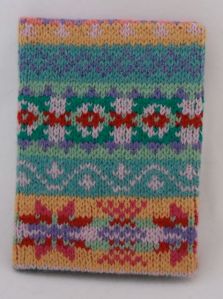 Next to the Spiders Web was a little shop selling all sorts of odds and ends, lots of collectibles and things like that.  However, in it there was a totally random adjustable sweater blocker, which I got despite knowing how much of a pain in the butt it was going to be to get home.

One of our favorite shops in Lerwick was the Peerie Shop, which also had (imho) the best cafe in the town at the back of it.  It was filled with quirky, gifty sort of things, but the thing that made it stand out in my mind was the amount of sheepy goods in it compared to other similar shops elsewhere.

I bought this really cool mug with all different breeds of sheep on it, including “Shorn Sheep” and “Mountain Bike Sheep”.  It’s very cute and is now holding pens and pencils by my couch in my room.  It makes me smile whenever I stop to look at it. 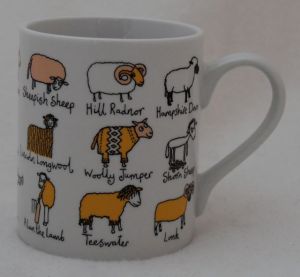 The shop also were selling some cotton bags with their store logo on them for a pound.  I couldn’t resist what with their logo being primarily a SHEEP!

(Yes, I am getting quite a collection of sheepy postcards!)

Lerwick also had an awesome little bookstore with a really nice knitting book section.  I got a couple of books there.

And Heirloom Knitting’s Shetland Hap Shawls: Then and Now by Sharon Miller

I also got another small book about Unst’s lace knitting traditions called A Stitch in Time: Unst’s fine lace knitting by the Unst Heritage Trust at the Unst museum.

The Shetland Soap Company makes lovely soaps right in Lerwick where I got a few bars.  They had these wee mini bars that will be perfect for making my yarns smell nice without taking up a lot of space.

And last, but definitely not least, is my new sheep pen:-)