I was in South Carolina for a week for training for work.  While I was gone, Red got her first ride in a car and trip to the vet.  My mom and dad took her in a pet carrier which I really wish that I had pictures of.  But hey, you gotta do what you gotta do sometimes.  She got a shot and some more meds and took it all totally in stride.  In fact, she didn’t even let out a baa when he gave her a shot in her rump!

So, I was in SC for a week.  Not a whole lot to say about it except that somehow I ended-up mere feet away from Rick Santorum who was at a Fudrucker’s down the hill from my hotel.

Also, since I had a little bit of downtime in a Hilton hotel room to myself with no dogs or cats wanting cuddling nor baby goats to be fed I had a little bit of a girly party and painted my nails with some fun nail polish that I snagged at Target while watching the SyFy channel on cable.  I also took a bath each and every night!

There are 2 polishes going on here.  The darker one is called “Give Me Moor!” and it’s from OPI. The silver crackly coat is part of the Nicole Texture line by OPI in Silver.  It was fun to paint on as it crackled nearly immediately.  It’s lasted quite well considering how hard I usually am on my nails.  Only today have a couple of chips formed on the tips of the nails.  I’m going to have to take it off this weekend as I am going to have some important meetings over the next couple of days and need a more (cough) neutral, professional look for them.

I arrived back in Iowa right before the first real humdinger of a snow storm that we’ve had this season.  I was pleased that my car started right away in the airport parking lot despite an outside temperature of about 0 degrees Fahrenheit (about -18 Celsius).  I got back to the farm around midnight and there was about 4 inches of snow on the ground by the time I got up in the morning to feed Red. 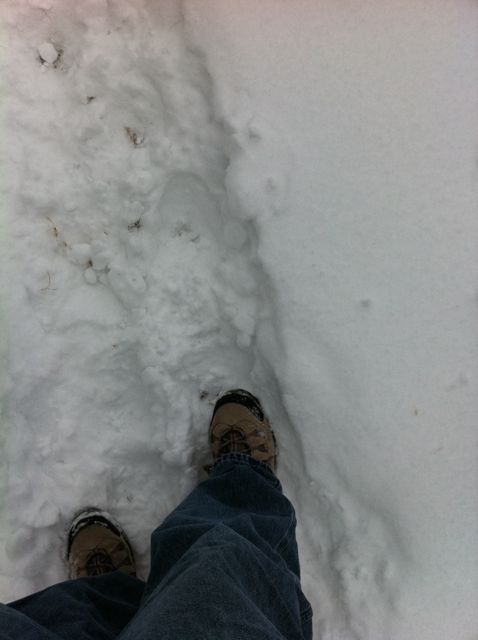 I started-out suffering through snow in my shoes and wet socks but then remembered that I had hiking boots that are a little taller than my regular shoes.  However, if we get much more snow I’m going to have to get actual snow boots.

Red missed me I think.

I think you need to see this shot a little closer-up. 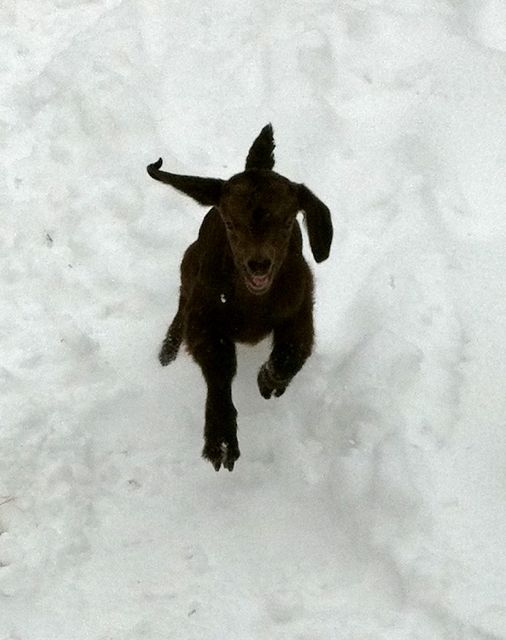 God I love that little goat!

However, she has grown even in just the week that I was gone.  Her lead over the other 4 babies is remarkable.  She is getting big fast!  Red has gotten so big that it’s getting hard to pick her up anymore.  Definitely no putting her in my coat!